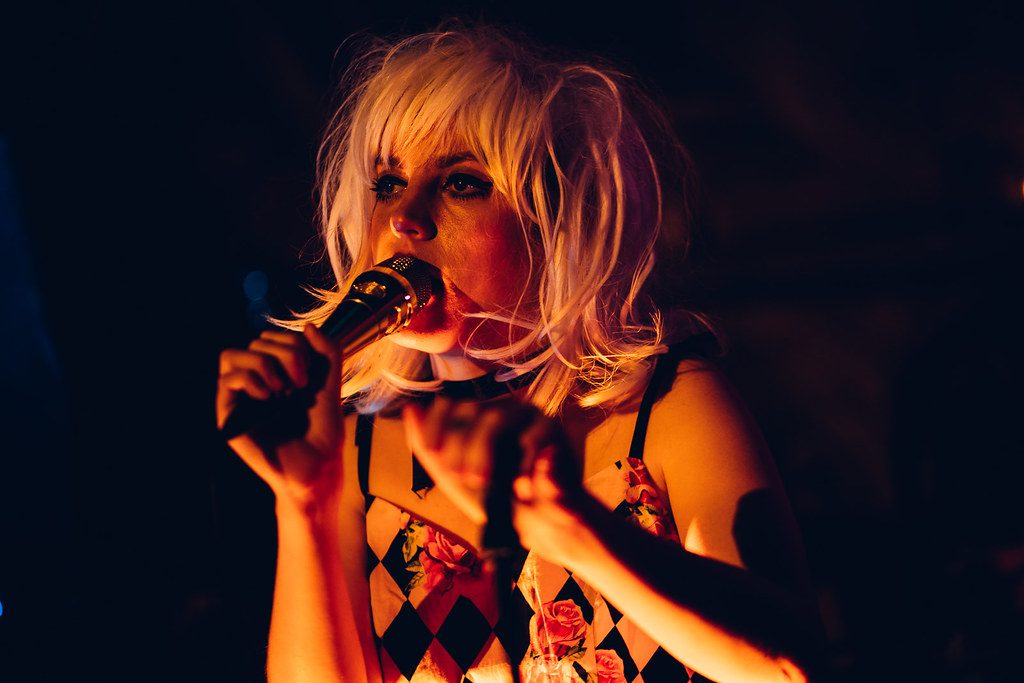 Image: Izzy B. Phillips of Black Honey at the House of St Barnabas, 2018 @ Paul Hudson via Creative Commons

Under the misty blue lights of Academy 2, Brighton-based indie outfit Black Honey make their long-awaited return to Manchester. Over the years, the quartet have earned a reputation for their raucous live shows and rightly so.

Lead singer Izzy B. Phillips is a force to be reckoned with, strutting about the stage, with her platinum feather-cut ‘do, and dressed in a ruby red floor-length dress and black platform boots. It’s a look fitting for such a formidable frontwoman, evoking icons such as Stevie Nicks, Kate Bush, and Marc Bolan.

Earlier in the night, support is provided by DIY duo Arxx, who bring a combination of fist-pumping punk and indie-rock to Academy 2, along with shimmering bedroom pop artist Phoebe Green.

Black Honey begin their set with ‘I Like The Way You Die’, the stomping lead single from the band’s stellar sophomore record ‘Written & Directed’. Phillips oscillates between a sultry lilt and a snarl, all whilst wielding her trusty guitar. Clean-cut guitar licks and retro riffs also come courtesy of Chris Ostler and Tommy Taylor. Meanwhile Alex Woodward enhances each track with pulsing percussion.

‘Corrine’ marks a poignant moment in the set, with Phillips clearly moved by the crowd’s continuing to sing where she leaves off. “I feel so lucky to be able to do this again”, she smiles. On the other hand, ‘All My Pride’ packs a punch with its pulsating instrumentals encouraging the audience to bounce along.

“Women to the front!”, Phillips declares to overwhelming cheers midway through the band’s set. There is a clear emphasis on tonight’s show being a safe space for female gig-goers. Men visibly shuffle to the sides, making way for a plethora of young female fans who joyfully gather round the barrier.

There’s something decidedly cinematic about the latest Black Honey record, with its artwork even paying homage to the films of Quentin Tarantino. This quality is amplified on stage, as Americana-inspired instrumentals resonate around the buzzing venue. The infectious hook of sugary indie-pop tune ‘Believer’ is echoed by the audience, whilst softer moments like ‘Dig’ and ‘Back of the Bar’ inspire awe.

Riotous ‘Run For Cover’ closes Black Honey’s set and boy does it pack a punch! Sizzling guitar lines and pounding drums invoke a frenzy among the crowd, with Phillips jumping off the stage and right up to the barrier. Fans surge forward for a chance to share the mic with the songstress, before she dives straight into the crowd in its final third. Rock ‘n’ roll in its purest form.

After the show, Black Honey head to the merchandise stand where they happily sign autographs and pose for photos with fans, with one such gig-goer having baked an ornate triple-tier cake for the band. In a somewhat bizarre but memorable turn of events, Phillips then proceeds to cut and hand out slices of cake to those who gather to watch. It’s a joy to see such an accomplished band interacting with their fans like this, and its certainly testament to their popularity.

If their show at Academy 2 is anything to go by, Black Honey have cemented themselves as one of the most exciting live bands around.