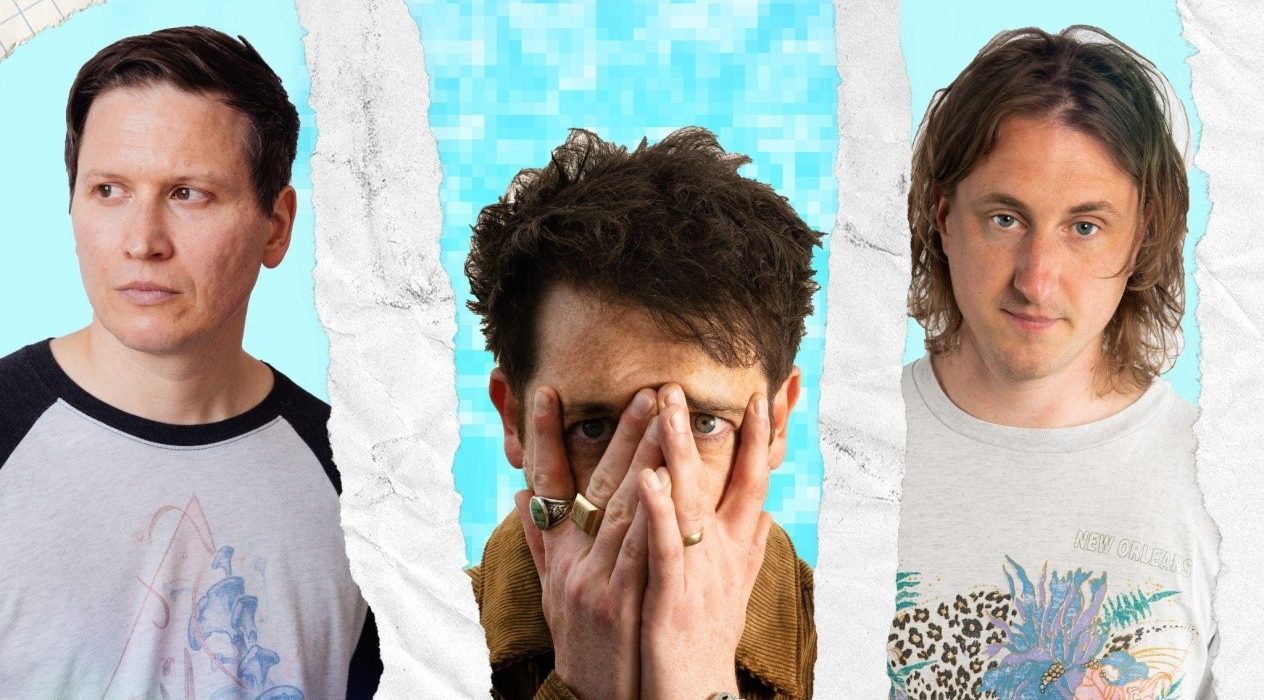 Photo: The Wombats via Pomona Press

On the cusp of releasing their fifth studio album, Fix The World, Not Yourself, Dan Haggis of indie-rock main-stayers The Wombats discusses the meaning of the record, how the band have evolved in the 20 years since their formation, and why the band keep dying in their music videos.

Your new record Fix Yourself, Not the World is out in January. Tell me a bit about the title, what are you trying to convey?

Dan: It’s the idea that rather than running away from your own demons with exterior distractions you turn the gaze inwards and focus on getting your own house in order. Then you can hopefully be a better partner, friend and member of society. The pandemic really forced everyone to reassess their priorities and it was a massive change for everyone, this album attempts to embrace the transitions in life.

What’s the best way to listen to Fix Yourself, Not The World?

Dan: Really loud, and from start to finish.

What sets the new record aside from your previous efforts?

Dan: I think we’ve pushed ourselves further than ever musically, there are so many genre U-turns in songs on this album, going from heavy grunge to alternative in ‘Ready For The High’, then from lo-fi electronica to drum n bass rock in ‘Method to the Madness’, the album really feels like a sonic journey.

What are you hoping people get out of the album?

Dan: I hope the title and lyrics make people think and have conversations, and musically that people never quite know what to expect as they listen through the album. Ultimately we want people to connect with it as much as we do and that after listening to it they give their demons a big hug and accept they’re going to be side by side for a good while, all whilst bouncing off the walls in their rooms of course! 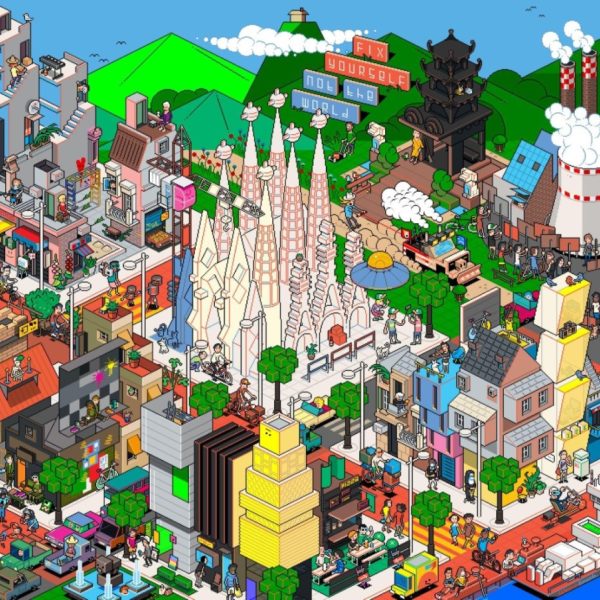 Photo: The Wombats Fix The World, Not Yourself Official Album Artwork

There’s a song on the album called ‘People Don’t Change People, Time Does.’ Tell us a bit about the meaning behind that tune.

Dan: Loosely, it’s an Americana inspired song that tells the story of a struggling actor in L.A. and how hopes and dreams can fade and be crushed with time. But I hope that, as with the album title, it’s a phrase that will make people think and question life. Disillusionment can come into one’s mind with time but can we work out a way to alter our mindset to counter these feelings? Despite things maybe not going according to our ‘plan’ we can still find happiness.

Is there an overarching theme drawing all the songs together?

Dan: I guess the album title sort of is the theme. From the chaos of the opening track ‘Flip Me Upside Down’ to the calm of the closing track ‘Fix Yourself, Then The World (Reach Beyond Your Fingers)’, the listener goes on a journey through the musings and inner thoughts of Murph’s brain and observations on life. If you’re honest and open with yourself and others about how you feel, life can be a little easier.

14 years ago you sang arguably one of the most recognisable opening lines in British indie music: ‘I’m back in Liverpool and everything seems the same’ – so how have things changed since then?

Dan: Well, Murph and Tord are both fathers so I guess that would be the biggest change for them. As a band, we now live in 3 different countries so we can’t pop round for a quick rehearsal in my Dad’s back lounge like we did when we were working on the song you mentioned but apart from the geographical change, the essence of the band is the same: 3 friends making music together.

How does it feel to have been together as a band for so long, coming up on twenty years, when so many other great indie bands can’t begin to compare to that amount of time together?

Dan: Proud, I guess. The music industry is a bit nuts and being in a band, touring the world can be intense but we just love it and we’re so lucky to have the most amazing fans ever who have supported us and helped us get this far.

Leading from that, how important is it to you to take The Wombats somewhere new, and how do you do it? How do you keep your head above the surface of everything you’ve done before when writing this album?

Dan: Every time we start writing for a new album, we try to push ourselves and change things up. It’s important to stay excited about music and go to the edges of your comfort zone. On this album, there really are song structures, chord sequences and rhythm changes that we haven’t done before, and it feels like such a varied, rich sonic journey from start to finish.

Do you feel like your creative intentions are maturing with your audience?

Dan: I can’t speak for our audience but we have certainly learnt lots over the years we’ve spent in studios with some of the best producers in the business and so we can venture a little further into different genres with each album and push the production and instrumentation more than ever.

We’ve noticed a bit of a trend of anti-Wombats violence in your music videos (‘Greek Tragedy’, ‘If You Ever Leave, I’m Coming With You’). Is there a reason for this? Is there a big viewership of people who want to see The Wombats getting beaten up?

Dan: [laughs] Yeah my Mum dropped her phone screaming when she saw me get killed in the ‘Greek Tragedy’ video…we just died again as 8-bit versions of ourselves in the video for ‘Everything I Love Is Going To Die.’ Not sure how it’s ended up happening to be honest, it’s good fun though and maybe we’re just psychologically preparing ourselves for our own deaths [laughs]!

As a main-stayer of British indie music, what’s been the highlight of your career?

Dan: Oh, there are so many, I guess supporting The Rolling Stones in New Jersey after Mick Jagger had posted a video of himself dancing to one of our songs was up there.

You’re playing one of your biggest shows to date at The O2 Arena in London. What can fans expect? Any surprises in store?

Dan: Well, they wouldn’t be surprises if I divulge that information [laughs]! As with all our shows, we’ll be trying to make it as special as we can!

You met at University in Liverpool and have since become a widely beloved indie rock band and a festival-headlining staple, do you have any advice for students who dream of doing the same thing?

Dan: Just find some people who want to make music and if you enjoy it, keep writing songs and playing shows, it’s the best therapy in the world and if any success comes along, it’s a bonus.

Do you have a final message for The Mancunion?

Dan: There was an old man called Michael Finnegan, he had whiskers on his chin-a-gen.

Thank you, Dan! And good luck with the new album and tour.

You can pre-order the new album from The Wombats, Fix Yourself, Not The World here.

You can buy tickets for The Wombats’ tour here. 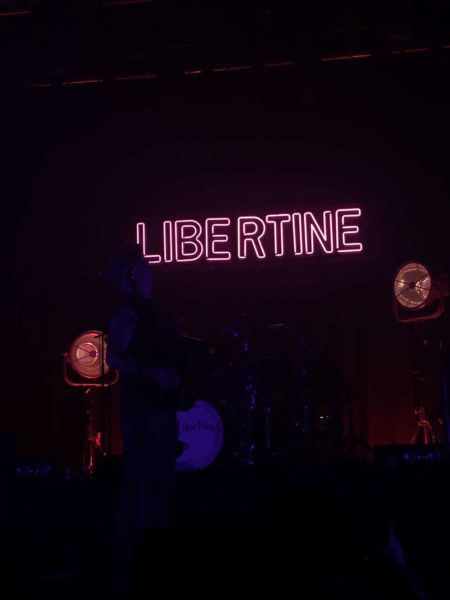