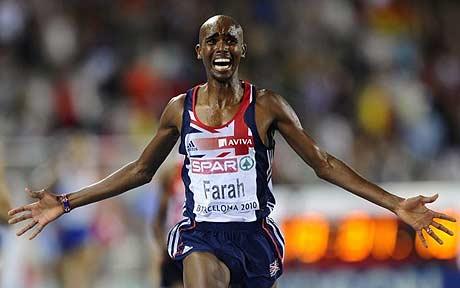 The new star of British Athletics in emphatic mood as he crosses the finish line.

The Great Britain Athletics team returned home successful from the World Championships earlier this month having achieved the target of seven medals set for them by their coach Charles Van Commenee. Alongside reaching that target, the athletes performance in Daegu, South Korea was the best performance by a British team in 18 years, with the likes of Dai Greene and Katherine England collecting medals which were not expected.Yet this should not mask the disappointments which were reigning world champions Jessica Ennis and Phillips Idowu, with both failing to retain their titles in Heptathlon and triple jump respectively. The deposed champions must now go back to the drawing board if they are to achieve Olympic glory on home turf at the Olympics next summer,with stronger rivals only likely to improve leaving Ennis and Idowu having to perform at a higher level than ever before.
Yet for another of Britain’s competitors these championships marked his step from nearly man to homegrown star come next year’s London games. The performance of Mo Farah to take gold in the 10,000 metre and silver in the 5,000 metre races is an illustration to us all of how hard work and tremendous mental strength can pay dividends.
At the beginning of 2010 Farah had never won a championship race. Yet crucial changes to his training and mental preparation in the past year have propelled him to new levels of success. Born in Somalia but raised in West London, Farah spent part of 2010 in Kenya. Where he undertook a rigorous training regime in the remote mountains of the Great Rift Valley alongside some of the worlds best distance runners. This proved crucial physical preparation. He followed this up by working with American coach Alberto Salazar who tweaked Farah’s technique and race strategy.
Yet the art of distance running requires more than just physical training, and working with the same sports psychology team that helped Michael Johnson win two gold medals at the 1996 Olympics in Atlanta was perhaps the clinching factor in the runner’s victory in the 10,000 metres. Farah had been beaten the previous Sunday in the dying seconds of the 5,000 metre event, which ended a 10 race unbeaten streak. Yet he bounced back leading the 10,000 metres from start to finish, a tactic which only shows how confident he was in his own ability.
It will be great to see the 28 year old run in front of his home crowd next August, if he replicates his form of the past year at the Olympic stadium in East London then Great Britain will have its first ever male Olympic champion in the 5,000 and 10,000 metre events.