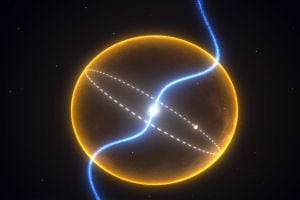 Pulsar in the sky with diamonds

Anyone who thought the Hope Diamond was a large gem may have another thing coming. Scientists think they may have found a diamond planet in our galaxy. The discovery of the companion star was made by a team led by Professor Matthew Bailes of Swinburne University of Technology, Australia. The discovery was then followed up by the Lovell radio telescope at Jodrell Bank Observatory, Cheshire. It was due to the observations made at Jodrell Bank that the companion planet was found.A pulsar is an extremely dense, fast spinning body with a strong magnetic field. It emits a beam of radiation which creates a light house effect. The pulse of light emitted from these dead stars has a constant period which gives the star its name. The pulsar orbited by this small planet rotates 10,000 per minute.

From observing the planet, named PSR J1719-1438, researchers were led to believe the star had a small companion planet. Around 70% of pulsars are in a binary system- a system with two bodies orbiting each other- with most companions being a dying, low mass star: a white dwarf. The size of the object orbiting PSR J1719-1438 makes it significant because it is smaller than a white dwarf.

The planet is thought to orbit the pulsar in 130 minutes at a distance of 600,000km. This is similar to the radius of our own sun. With a diameter one fifth the diameter of Earth but a mass greater than Jupiter, the new planet is extremely dense. The distance between the pulsar and planet indicate the body must once have been a white dwarf with most of its matter eaten by the pulsar. It must therefore be composed mostly of carbon and oxygen. Scientists think that the high density of the planet means these elements must be in crystalline form. Crystallised carbon popularly known as diamond.

Before we consider heading over there to mine what could be truly conflict free diamonds, we should remember that it is 4000 light years away. If NASA’s New Horizons spacecraft will reach Pluto in just under 10 years travelling at a speed of 16km/s, it will reach PSR J1719-1438 in 74 million years if travelling at the same speed. Synthetic diamonds suddenly look a lot more attractive.

In the meantime, researchers looking into this unusual binary system are hoping to use the Hubble Space Telescope to get a closer view of the planet and to see whether it really does sparkle like a diamond.