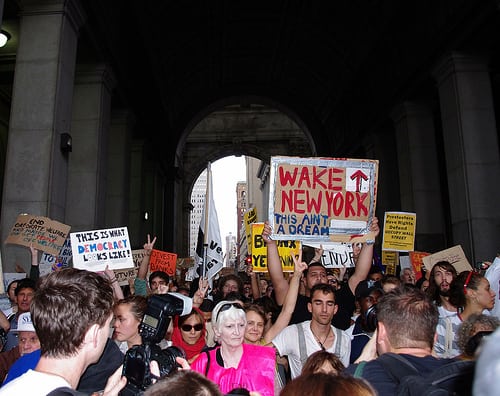 The Occupy Wall Street movement, which is protesting against perceived greed and corruption in the US, has been backed by major Trade Unions. Photo: david_shankbone at Flickr

Dismissed as a ‘leaderless’, ‘directionless’ bunch of Frisbee-throwing-hipsters when they marched into the heart of New York’s financial district more than two weeks ago with banners that read ‘Too Big Has Failed’ and ‘Free Market My Ass’; the 200 or so activists who began the Occupy Wall Street protests have since seen their demonstration turn into a nationwide movement that has made news across the world.

Despite a series of police crackdowns and terrible weather conditions, the protests in Wall Street have grown to a peak of almost 5,000 people; while similar campaigns have started up in Chicago, Los Angeles, Florida and Denver.

In a further boost to the campaign, trade unions including the United Federation of Teachers, the New York Transit Workers Union and Service Employees International have pledged to help the Occupy Wall Street movement, and have planned a series of demonstrations supporting the protests starting in the week beginning October 3rd.

“This is literally an uprising of people who have had it,” said the film maker Michael Moore, who was at the protests last week. “It has already started to spread across the country in other cities. It will continue to spread… it will be tens of thousands and hundreds of thousands of people… their work ahead is not as difficult as other movements in the past.”

For the activists who have spent the last two weeks sleeping rough and making their voices heard in the re-named ‘Liberty Plaza’ in lower Manhattan, the message they want to get across is clear. They are sick of having their life chances dictated by the actions of the super-rich. “We are the 99% that will no longer tolerate the greed and corruption of the 1%”, is how one protester chose to characterise it.

The Occupy Wall Street protests are not so much a coherent, organised political movement as the actions of a group of predominantly young people sick of living in a country where people leave education with huge debts and little chance of employment. A country where the individuals that caused the largest financial crisis in decades can be rewarded record bonuses for simply manipulating money. A country with political leaders such as Rick Perry who brand social security a “Ponzi scheme”; while at the same time arguing that any effort to tax the rich is tantamount to “class warfare”.

Predictably, the American right have been quick to criticise the protests. An article in the usually moderate New York Daily News, for example, called the protesters “precious insufferables”, adding: “This bunch ought to get down on their knees in thanks that America’s capitalist Founding Fathers saw fit to protect the privileges of the dumb and obnoxious along with everyone else”.

The author goes on to say that the protesters should “salute the NYPD… for paying diligent attention to ensuring that peace reigns in their daze of rage”. Last week a video was released showing a New York police officer spraying mace into the eyes of several female protesters.

In truth, however, the anger expressed in the New York Daily News does not chime well with the thoughts of the majority of people in the US. Recent polls have shown that ordinary Americans are enraged by the actions of Wall Street during the current financial crisis and that a majority support the idea of increasing taxes on the richest Americans in order to help pay off the national debt; one of the key demands of the protesters.