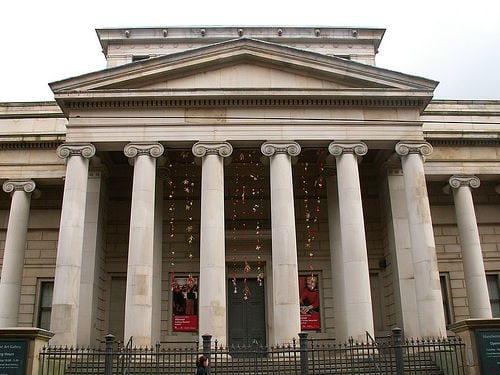 This central representative of the Manchester Museums Consortium does what it says on the tin. Other Consortiums include the Lowry, Imperial War Museum, and our old friend the Whitworth. This particular tin contains a mere 25,000 ‘items’, three floors, and 21 rooms. Its hard casing of classical Palazzo architecture replete with columns invokes the hushed tones appropriate for the historical gravitas of such a building, and confirms its place among the old boys: Cambridge’s Fitzwilliam, or Oxford’s Ashmolean. The focus here is on the classics: British and European watercolours, ceramics, furniture.
However, classically for Manchester the exhibitions involve a twist on the traditional. They gravitate towards the urban, local and relevant. Currently, Grayson Perry: Visual Dialogues, fusing historic and contemporary items to invoke debate, awaits your consideration. And artfolk are mad for it, the forthcoming Ford Madox Brown: Pre-Raphaelite Pioneer, will not disappoint. The collection fittingly focuses on the artist’s years in Manchester. A Saturday afternoon favourite.
Grayson Perry: Visual Dialogues, until 12/02/2012
Ford Madox Brown: Pre-Raphaelite Pioneer, 24/09-29/01/2012 (£6 entry)