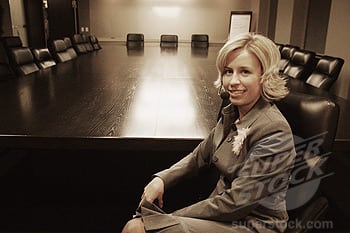 Women in the boardroom

A very important and understated liberation week commences today- Women’s Week. Sexism in our society is rife and spreads right up to the top employers in our country. Today, women account for half the population and yet only10% of board members in Europe’s big firms are female. The prejudice women face in the workplace is nothing short of a disgrace.

As my mother constantly reminds me, at GCSE level, females generally achieve better across the board than their male counterparts. Yet, UK national earnings do not reflect this; in 2009, the Government estimated that women earn 21 per cent less than men. This gender disparity has to be corrected. Women are no less hardworking, intelligent or deserving of the wages men get.

Employers often cite the uncertainty they face when employing women as a disincentive to employ women to top positions within the firm; it is feared that the woman might become pregnant and therefore require a long period off work – a situation ironically exacerbated in some cases by leave becoming a legal entitlement. This fear is no secret in the industry, with even (Lord) Alan Sugar claiming it should be legal for an employer to ask a woman if she is pregnant, or planning to have a family, prior to appointing her. What is fair about asking women to choose between their family and their career? No one chooses which set of chromosomes they are born with and neither gender should be discriminated as a result.

Long gone are the days when the stay alone mother was deemed integral to the moral foundations of society. Such ideas are outmoded, a throwback to Victorian patriarchy. The modern welfare state should support women who choose to work and those who don’t, and the recent coalition documents leaked suggest frontloading child benefit to assist mothers struggling with childcare and lost earnings in their children’s first years.

It is important the coalition does not ignore women’s issues during the headline grabbing turmoil of the recession and this is a good scheme- employers aren’t disincentivised from employing women. Allowing a woman to continue her career after the birth of her child seems like a great use of taxpayer’s money, and would go some way to reducing the deficit between male and female earnings.

Another proposal, which builds on the Equality Act, suggests the need for complete transparency, so that women can anonymously compare their wages with males in the same industry. This will ensure that discrimination against women can’t be hidden – and what do employers have to hide anyway: we all want gender equality, right?
Some may suggest that these issues are ‘market issues’ (rather, say, moral or ethical ones that transcend ‘the market’), saying that companies should be allowed to employ whom they want, and that those who employ women will inevitably benefit from increased profits as a result of the female employee’s work. Unfortunately, whilst this may be true, the market does not account for human prejudice; women may indeed bolster profits, but unless they play football with three balls, they may still not be employed.

‘The market’ in any event should not be seen as the be the moral compass of our society. Indeed, the ‘market’ justified slavery for generations; without the Cotton Farm Act children might still be working for even less reward than we give our women. The market alone cannot solve this problem; if we can legislate against injustices caused by the market, why should we refrain from doing so in the case of gender disparity? Women aren’t being paid less because they are incompetent.

Women should be in the same highly paid jobs as men, so it is appalling that in 2009, females in the City were being paid as much as 60 per cent less than their male counterparts. Having women in positions of power dismisses the myth that women are less able to manage people and make important decisions than is popularised in male mythologies of female “scattiness”, whilst providing girls across the country with important new role models. By taking positive action now, we may be able to change social norms too.

In the House of Commons, women account for 22% of MPs. True, you don’t have to be a woman to legislate favourably for women, but this misses the point completely; even at the highest level of our legislative process, women are immensely underrepresented. The idea of a meritocracy is often used to justify the gender imbalance, but surely there are females who are as adequate, some might argue rather better than, the current crop of (extremely mediocre) MPs.

The onus is very much on party leaders to encourage women to stand up and break the Boys Club attitude. The delight and mirth with which David Cameron’s recent ‘she’s frustrated’ comment about Nadine Dorries in Parliament was greeted by indicates the continuing extent of a problem that runs from grass roots right up to front bench politics.

This is why Women’s Week is so vital- in raising awareness of the plight faced by women, in encouraging 50% of the population to have self belief, to ensure British women won’t be subjugated, and to let everyone know that an effort is being made to rectify the archaic pay differences between men and women. When my children are at University, hopefully there will be no need for a ‘Women’s Week’.