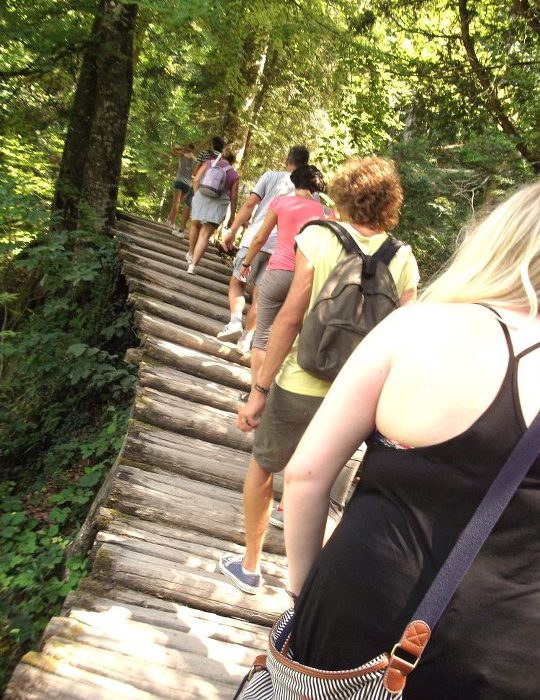 Being stared at by thirty expectant crossed legged six-to-ten year olds is pretty nerve-wracking at the best of times, but it’s not made much easier by a stray dog wandering in from the street, nibbling at your flip-flops before being chased out by a hail of stones, sandals and text-books.

The children calm down after this event, albeit after much cajoling and vague threats, and return their attention to my shakily drawn approximation of the alphabet. I’ve made mistake, missing out the letter N, but it took me so long to get them to quieten down I really don’t want to turn my back on them again.

Also, there’s no chalk left, most of it was wasted on the dog. “A..B..C…” they sing in unison, happily absorbing nothing at all. I wish I was a better teacher, I really do, help the kids raise themselves out of the slums and all that, but after a month, they have only got to the letter R. And they still don’t know about N. – Edward Usher

My interrailing trip started off in Belgrade, as my best friend and I thought we would stray from the European places that interrailers typically visit. We thought we were being pretty edgy, but actually found ourselves surrounded by other Western European students in the hostel who had the same idea.

With low expectations for daytime activities we arrived in Serbia and were pleasantly surprised.  We visited the Belgrade fortress in the Kalemegdan Park, a favourite with tourists due to its amazing views of the Sava river and picturesque walks.  The fortress itself was refreshing to visit as it hasn’t been “national trustified”  – it is completely open to the public with no entrance fee and few informative signs, making our morning there a relaxing breakfast picnic.

If you fancy something more adventurous, then you should visit the Ada Ciganlija, an island turned into a peninsula in the Sava river, with a 7 kilometre long beach.  The island has been conceptualised as Belgrade’s centre for mass sporting activity and recreation, with excellent facilities for sports ranging from water skiing to alpine skiing, or just sunbathing…

In terms of nightlife too Belgrade is full of options.  Skadarlija, the city’s bohemian quarter is well worth a visit to try typical national food and drink, visit galleries and listen to traditional Serbian brass.  For a big night out the KST (Klub Studenata Tehnike), located in the basement of the university’s faculty of electrical engineering has excellent value for money and plays good music.

For a student, funds play a huge part in planning a holiday, and Belgrade’s cheap prices are certainly beginning to reel in more and more backpackers.  Belgrade’s mixture of culture and activities make it a winning destination for the young traveller, which should become a typical stop on the student interrail trip – not just saved for my edgy self. – Pippa Stannard

So you’ve finished your first year of uni. You’ve flown the nest and gained independence. After a year of waking up at midday and eating cereal at 9pm just because you can, the prospect of returning to your loving (suffocating) parents for a summer at home couldn’t seem much less appealing.

So I didn’t.  I booked a one way ticket to Paris with a friend – au revoir parents! It was certainly different. In fact that was the first thing we learnt; everything that doesn’t go well is put under the “experience” category.

From figuring out the French bureaucracy system, mastering the Parisian glare and most importantly learning exactly how many kisses to give to which people on arrival at work.  “Just say yes”: one of the most over-used phrases to anyone going anywhere new (yes, you freshers should recognise this) couldn’t have been more useful, or more cursed, putting us in some very strange situations – a blind date with a middle aged French man met on couch surfing?! But it also led us to late night drinks on the Seine, popping one Euro champagne, feeling swag and yes the time old cliché of meeting some great people.

So I didn’t go tubing in Laos, find myself in India or even come back to uni smug after a summer of working and earning. But I pushed passed tourists with a snooty sigh getting on the Metro by the Eiffel Tower…..and that thrill will last a lifetime. – Georgia Stevenson

Whenever I told anyone I was going to Central America, they would always ask which state.  I think this general naivety pretty much sums up how little we know about this part of the world, which also explains why it is so beautiful – so far, pretty undiscovered.

Central America is in fact, the little string of land that connects South America with Mexico and the States, Pacific Ocean on the East Coast, Caribbean Sea on the West.  It is made up for seven countries, four of which are the CA-4 countries; Nicaragua; Honduras; El Salvador; Guatemala, which have an agreement that you can travel between them for free (without paying country exit and entry fees).  These four are also currently the least touristy of all Central American countries and that’s what makes them so magical – there are never big crowds of gringos annoying the locals, and while the tourism is not completely developed yet, there are no pretences – you see the country for what it really is.

Most people think to go to South America to experience the Latin American culture, but Central America is as equally as Latin as the South.  Central America has a hot year round temperature being on the equator (whereas it gets a lot colder in South America).  It’s the perfect place to do Spanish courses, cooking courses, volunteering – with animals or people, or is the perfect place to travel if you just have a month or two as you can easily fit all seven countries into six weeks and that would give you a great taste of Latin American diversity. – Louise Spearman

Many of us have a wishlist of “places to go, people to see and things to do”.  Whether the list consists of beaches, cities or the wonders of the world, as a student now is the best time to travel.  Students can take the opportunity through gap years before or after university, study abroad exchanges or making use of those long summer holidays.

New York City is top of my list of places to go.  There’s iconic images of the city that are great to experience first hand:  the lights in Times Square, the view from the empire state building, central park and the list goes on.  Whilst in NYC, take the opportunity to catch a Broadway show, baseball, basketball and to checkout the Metropolitan Museum of Art.

A six hour roadtrip from NYC takes you to the beautiful Canadian city of Montreal, which has the refreshing influence of Parisian culture.  Montreal boasts of architecture from the 1600’s, an olympic park, museums and Mont Royal itself.  Then there’s a whole host of summer and winter festivals, NASAR, the cycling grand prix and formula 1.  – Thaddeus Anim-Somauh

In April 2011 I took part in ‘The Hitch’, a charity run event where pairs hitch-hike to either Prague or Morocco. I chose the route to Prague and travelled with my friend and flatmate Ingrid. I can say with confidence that the hitch-hike was a brilliant experience. It was exhausting at times, but the lows helped the highs seem so much higher! I’ve never done anything like this in my life, with only going abroad once before and I would definitely advise travelling to anyone who is thinking about it. Seeing Europe has made me want to travel much more.

Prague is an amazing city for food. The first night we went for Pizza, and it was delicious. One of the best meals I’ve had in a long time. Prague has such a nice atmosphere, very bohemian (we were in Bohemia so what can you expect). We seized the opportunity by taking many photos and being proper tourists. One night we even went for a drink in Old Town and the bar had such a vibrant atmosphere; everyone was enjoying themselves in this city. Prague is quite big, and has a lot to offer.

A few tips if you travel through Europe: it’s expensive, even in the Czech Republic. Bring money, as you’ll need it. It’s not so much the hostels, but for food and drink. Also, if you hitch-hike make sure you bring a sleeping bag and go with your instinct. Plan your route loosely, and go with the flow. The memories of my trip shall stay with me for a long time, and I am so glad I had the opportunity to do it, as well as raise such a huge amount for charity. – Cliff Fleming