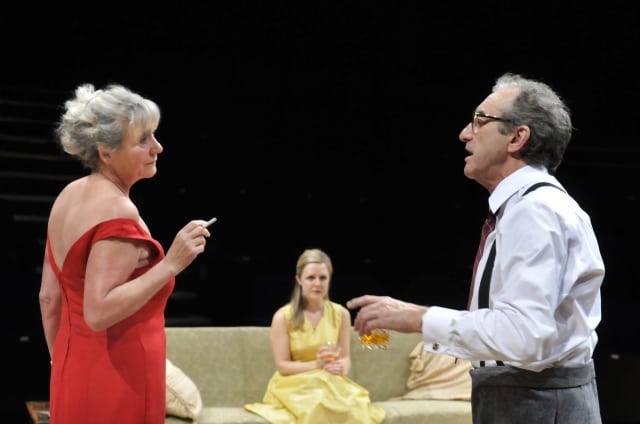 Fix me another drink

Three stars out of five

David Thacker’s production of Edward Albee’s Who’s Afraid of Virginia Woolf? draws out the black humour of the three-act American drama that explores the extremes of a couple’s maliciously destructive relationship. It is the play’s dark comic edge that is used to mock the absurdity of the central characters as they constantly attempt to destroy one another through verbal abuse.

The central protagonists Martha and George, played by Margot Leicester and George Irving, entertain a young couple, Honey and Nick, played by Tammy Joelle and Kieran Hill, for the evening after a faculty party. This ‘after-party’ provides the setting for the three-act play that is driven by Martha and George’s malicious ‘games’, acts that are essentially attempts to savagely humiliate one another and at points both of their guests.

One of the most noticeable directorial decisions, certainly in terms of the set, is David Thacker’s use of a circular stage. Staging George and Martha’s living room on a circular stage in the middle of the auditorium makes the play seem less of a performance of fiction but rather makes the audience feel they are being given an intimate view of the couple’s world. In fact there is actually something about the self-contained staging that makes you feel as though you are almost intruding on the couples’ developing hysteria. This intensifies the tension, which is present throughout the play, as George and Martha speak in coded terms about ‘the kid’. From the outset ‘the kid’ is the drama’s central mystery – as Martha initially threatens ‘I’ll talk about him if I want to’ – a mystery that symbolises one of the play’s central themes: the conflict between reality and façade.

Perhaps one of the most interesting aspects of the performance is how the drama translates, from being so inherently set within its American context into a modern day theatre in Bolton. There are moments where the play’s most distinctive ‘American-isms’ – most noticeably George’s use of the word ‘smucks’ – for some reason sound a little awkward and unnatural. However the performance doesn’t fail to convey the sadistic way in which George and Martha psychologically tear one another apart. It is these sadistic games that lead to the drama’s pinnacle moment where it becomes clear that Martha’s obsession with illusion has led her to take extreme measures to escape reality.

The way in which this performance presents the hollow meaninglessness of the four characters lives could be seen as proof that ultimately Edward Albee sees it as his job as a playwright to ‘ask some interesting questions and expect the audience to provide some good answers’.

Who’s Afraid of Virginia Woolf? ran at the Bolton Octagon from 22nd September until 15th October.