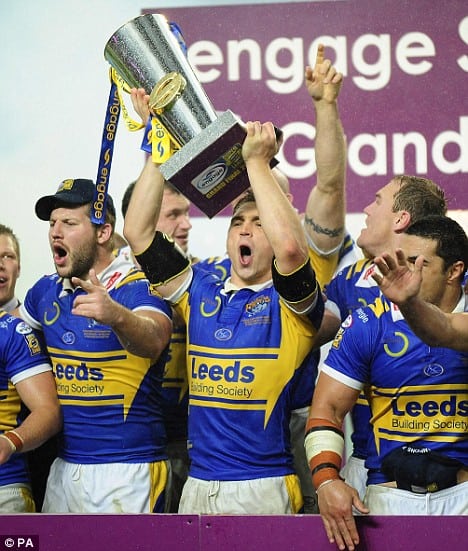 Leeds Rhinos secured their fourth Engage Super League title in five years at the Grand Final held at Old Trafford at the beginning of the month, and seven of their players have been picked for England in the Four Nations Series which begins shortly. A remarkable turnaround, considering their finish at fifth in the league table. It’s been a rollercoaster season all around, with drama on and off the pitch.

The league finished with Warrington Wolves beating Wigan Warriors to the top by one point, both teams having pulled away from the crowd some six points below. Wigan had hoped to do the double after smashing Leeds Rhinos earlier in August, the first return to Wembley for Wigan in 13 years. Yet, it was St Helens and the Rhinos who fought their way to the Super League final. St Helens have now been defeated five times consecutively.

For the new season, it has been announced that Widnes Vikings will join the thirteen existing Super League teams. This news came as, in July, the attempt to break out of the Northern mould of Rugby League was lost when Welsh Crusaders withdrew their licence for the new Super League round up. With serious financial difficulties, an uncertain future lies ahead of the club which has also seen its Championship bid rejected by the RFL board.

Whilst Super League hopes floundered in Wales, across the Channel, Trent Robinson, coach of Catalan Dragons, has given a breath of life to the French team. Since their entry into the British league in 2006, their path has been a difficult one. In 2007, they became the first non-English side to reach the final of the Challenge Cup Final. Since losing in that final to St Helens, they’ve yet to achieve any significant honours, but hopes are high for the next season.

Reason for optimism can also be found in the academies across the country which continue to churn out exciting new British talent, such as Wigan winger Josh Charnley or St Helens stand-off Jonny Lomax who featured at Old Trafford. Yet, there is still a distinct lack of English coaches to take the helm that is becoming a cause for concern for many people.

As no official sponsor has yet to be named for next year, rugby league continues to struggle commercially and fall into the shadow of its flashy brother; Rugby Union. Not only does union continue to dominate popular TV and media, but there is a lucrative business to be made in coaxing young stars to the dark side.