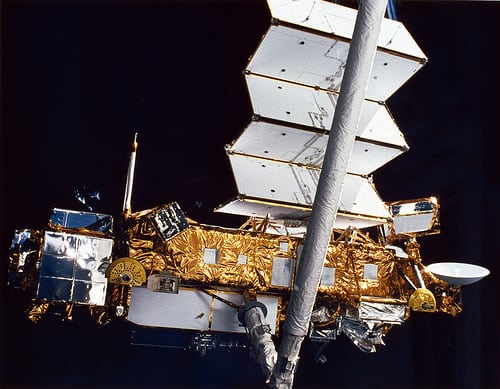 It is easy to sensationalise the fall from grace of a five tonne NASA satellite crashing into the earth, yet the terror induced by NASA’s oblivious claim that the satellite “could land anywhere” was not realised as it is believed to have harmlessly crashed off the US Pacific coast around 04:16 GMT on the 24th September.The UARS (Upper Atmosphere Research Satellite) was the largest NASA satellite to re-enter the earth’s atmosphere uncontrolled for 30 years. Most of the satellite was believed to have burned up on re-entry, with models indicating that 500kg of the expensive shrapnel could have survived to rain down over an 800km area on the earth’s surface.NASA estimated the threat to life posed by the UARS as being just 1 in 3,200, a figure which is higher than 1 in 10,000 risk limit NASA aims for. It was expected to land anywhere between 57° north and 57° south of the equator, a broad and hence rather unhelpful calculation encompassing most of the populated world between the UK and southern tip of South America.

The 20 year old UARS was launched in 1991 from the space shuttle. This multi-instrument equipped satellite set a president in measuring numerous chemical constituents of the atmosphere with the aim of better understanding the chemistry in the atmosphere. The UARS provided valuable information regarding the depletion of the protective stratospheric ozone, proving especially useful at illuminating concerns over the Antarctic ozone hole and the effects of the Mt. Pinatubo eruption on the atmosphere. In 2005 the satellite reached the end of its productive science life when it ran out of fuel. Wiith the days of glorious recognition of its seminal contribution to atmospheric science long in the past, the UARS had been orbiting the earth in despondent redundancy for 6 years.

NASA assured reporters at a press conference before impact that nobody had ever been injured by objects re-entering from space, and the US government will pay for all damage as they did in 1979 when the Skylab satellite crashed into Western Australia. However awestruck one may be from finding a piece of space technology close by, opportunistic eBay sellers must remember that unfortunately the artefacts are still property of the US government.