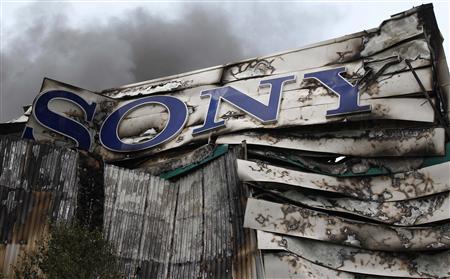 The burnt out Sony factory as a result of this summer's riots.

There are many things a British summer brings to its melancholic public: the eternal quest for something resembling a hot day, an ever-growing collection of comeback tours and an ever more pressing search for a festival without either Arctic Monkeys or Muse somewhere on the bill. This year however, the summer break also brought a disastrous day in the history of British music. Thanks to the riots of August 2011, there was an earthquake within the industry, the repercussions of which will still be being felt for many months to come.

Originally, the biggest fears were of damage to a small number of venues, and although a select few nights had to be postponed, this masked the far greater problem at hand. Along with the mandatory looting of JD Sports and Foot Locker came the tragic torching of the Sony DADC warehouse in Enfield, North London. A major distribution centre for record labels across the country; the leading lights of Britain’s music trade held stock in the warehouse. Such names as Rough Trade, Domino and Modular were all affected, but essentially will battle through. The far greater problem is the damage done to the little men, with a large number of independent record labels and record stores staring liquidation in the face. Closer to home, Manchester’s Piccadilly Records was left on its knees, with dwindling stock unable to satisfy customer demand. All in all, over 200 labels had retained stock in the Sony warehouse, only for the majority of it to be set ablaze.

I know we are now over a month on from the incident, but this single event of mindless vandalism could well have been the decisive nail in the constantly lowering coffin of independent record stores. So, who’s to blame for this? Is it our top columnists such as Alex Curran, writing her ‘insightful’ horseshit in OK! every week about “bargain” tops for hundreds of pounds? Is it the influx of the so-called ‘gang-culture’? Now I’m no politician (we’ll get back to them in a minute), so cannot place judgement on the validity and causes of these social episodes, but I do know that no one gained anything from the sour occurrences of early August. These little fuckwits were inspired to burn down a factory, thinking they would get a free PS3 out of it and the result is UK’s largest stock of independently released records being reduced to mere charcoal.

Obviously there was likely to be a social response, perfectly encapsulated by a tweet from Alex Kapranos (Franz Ferdinand) stating: “Where the fuck are the Bullingdon boys? Would you only end your holidays if it were Fortnum & Mason being looted?” Looks like a good step towards our ‘Big Society’ then.

With hard copy sales of music already nigh on decimated by digital downloads, and the readiness of music anywhere on the internet, the actions of early August have gone a long way to signalling the end of the beloved record store. A place where you could wile away hours sifting through shelf after shelf, only to stumble across a peach of an album. Yes, we do still have HMV, but it’s just not the same.