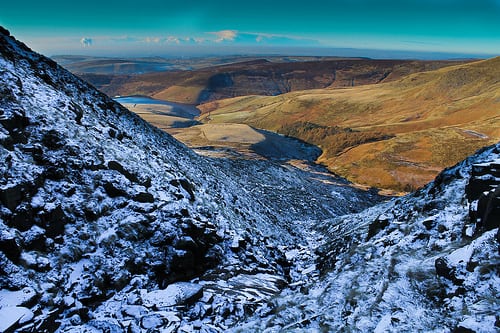 Places to go, people to see…

Now, as bloomin’ wonderful as the beautiful city of Manchester is you may well be at the point now where you’re sick of spending your Saturday afternoons in the Arndale, bored of kick-abouts in Platt Fields and just want to get away for the day. Well never fear because the Lifestyle team are at hand with a plethora of places just a hop, skip (and maybe a train’s ride away) for you to visit when the city sky-scraper sights just get too much.

Take yourselves back to the heat wave of last month when Manchester reached a soaring 24 degrees, my housemates and I decided that it was ‘now or never’ to go on the long overdue Peak District trip we had all been talking about for so long.

So we packed a car, three bikes, sandwiches, Red Stripe, good humour and set off into the unknown.

I was one of the unlucky ones who didn’t get a space in the car, but, once we were on the Sheffield bound Trans-Pennine train from Piccadilly, I realised that the public transport way of getting there was a piece of cake.

We shortly reached a sweet little village, called Edale, in which there is an average-to-good pub with slightly overpriced food, a great selection of vintage ciders on tap, and friendly staff.  After a pint of Old Rosie, we embarked on our real adventure.

We walked along the footpath for about 20 minutes, through a farm, over endless picket-fences and eventually broke free from the track to find the ideal perch to sit and enjoy. The sunset was glorious, the views were impeccable, and the sense of achievement was second-to-none.

A day trip to the hills is highly recommended, choose your day carefully (weather-wise) and just do it, because otherwise, you run the risk of spending 3 brilliant years in a brilliant city, without ever having a taste of what is just out there; go on…      – Lil Hadden

Made famous by open air concerts from the likes of Supergrass, Travis and Oasis – and soon to be the backdrop of The Stone Roses 2012 comeback – Heaton Park is only 20 or so minutes from the city centre on tram or bus so there’s no excuse not to go.

Have a stroll around the animal centre, have a game on the pitch and putt golf course or even hire a boat or if you’re feeling really shameless hop on the ‘Heaton Hopper’ for £1 a go to make sure you don’t miss a thing!

With over 600 acres of greenery, Heaton Park is the perfect setting for you to regress back to your 10 year old self with a 99 and feed the ducks some stale bread on the odd sunny day that Manchester experiences during these crisp autumn months.       – Lily Howes

A swift (thirty minutes) and cheap (£3) trip down the tracks from Manchester Piccadilly will take you to the village of Disley in Chesire, where the largest house in the county can be found.

Lyme Park is everything you could ever want and expect from a National Trust property – and that little bit more.  A rolling deer park, beautifully sculpted gardens, a seventeenth-century Tudor mansion designed by a flamboyant Italian and, of course, a cafe to fill that afternoon tea-shaped hole in your day.

So asides from an opportunity to break free of Market Street’s smoggy recesses and having somewhere new to point your new camera, what is it that makes it that little bit special?  Two words: Mr. Darcy.  Lyme Park served as the setting of Pemberley, the home of Colin Firth’s brooding character in the BBC adaptation of Pride & Prejudice – the ultimate pilgrimage for those who think that wet shirts and outdoor pursuits should go hand-in-hand.     – Emily Brown

Advertised as the most visited of the Nation Trust’s properties, Dunham Massey in Altrincham, Cheshire is an early Georgian House which is built around a Tudor core.

It may not be the typical weekend visit for most students, but Dunham Massey’s luxurious atmosphere as well as serenity would be perfect for a quiet day of reading, walking and a place to get away when the city centre and hustle and bustle of Oxford road are becoming too much.

One of the striking factors of this park is the fact that there are Deer which are free to roam the premises; adding even more authenticity to what could be deemed quite a fairytale setting anyway.

It costs £5 for car space and the use of the public park. Food is pricey; but that’s to be expected if you’re heading down to Cheshire. Pack a lunch, pick a spot and get lost in your book. It’s going to be a chilled day.     – Naila Missous

Granted, Salford Quays isn’t the first go-to for us students. It’s out of the way, more upmarket and opening hours tend to be in the daylight. However, these are things that make Salford Quays so worth a visit.

The Quays are home to, most famously, the Lowry Centre, the Imperial War Museum in the North and Media City. Although most of the latter is still a building site, they are all architecturally astonishing. You’ll find yourself transported to a strange sci-fi world of avant garde buildings that seemingly defy gravity. This continues into the Lowry where the floor is made up of a series of waves.

The Quays are great for those looking for a bit of culture that goes beyond the Manchester Museum and The Whitworth Art Gallery. The Lowry is a haven for the arts, housing two theatres and an exhibition centre. The Imperial War Museum pretty much speaks for itself but it can also be hired out as an impressive venue in the evenings and at weekends.

For anybody else, around the Quays are bars, restaurants and shops; basically everything you need for a day or evening spent away from the honey pot areas of town.     – Elizabeth Harper