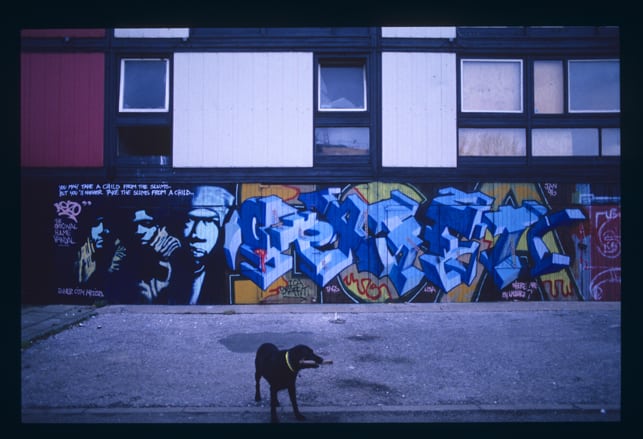 From past to a present – fabled Al Baker spun us a yarn. WEB EXCLUSIVE

Remember Hulme estate’s torrid to tepid past? Well if you don’t (or you do), read on.
Because we couldn’t resist asking the resident lens-witness of those ebbs and flows a few questions on what he remembers from those years – Manchester’s loyal-est photographer Al Baker.
October 2011

PC: Where and when did you live in Hulme estate?

AB: I moved to Hulme at the beginning of the 90’s into the deck-access flats which were already due for demolition & urban regeneration even then. I’ve had different properties dotted around; I still live there.

It was a significant time for me as I was entering my 20s, into the first flat that was solely mine, a spare room for my baby daughter. As for living in Hulme, as Billy Shakes says, “It was the best of times; it was the worst of times…”

PC: Why, in your opinion, was the Hulme estate such a creative hothouse, music graffiti, poets…?

AB: Well, originally of course it was one of those new ways of thinking in 60’s housing, a definite Le Courbusier influence, ‘A Design for Living’. The Car was environmental demon of the day then, so there were very few through-roads & the estate was quite self-contained, with multi-level ‘streets in the sky’ walkways between blocks. You could walk from one end of the estate to the other without touching terra-firma.

Then there were the Bullrings, 4 huge crescent-shaped blocks of flats with a different thing in the centre; a playground; open space; trees; the Eagle pub; but it never really worked. Heating & cockroach problems meant the council tenant families moved out & the flats were filled (mostly) with students, unemployed, squatters, junkies, artists looking for space.

PC: Was it the freedom or the alienation from society that fostered such an environment?

AB: Both. Emergency services found access difficult, so flats burned; police could be chasing a mugger into a stairwell where there might be 6 or 9 different escape routes for him so they stopped bothering. Burglaries & muggings were rife. As were the availability of a pharmacopeia of illegal drugs. It became quite hedonistic but also quite dangerous. You couldn’t get a taxi in or out of Hulme. You couldn’t get a job with an M15 postcode. People were left to their own devices. Poverty & Freedom writ large, with the volume cranked up.

PC: How did you feel when the estate was demolished?

AB: Sad, very sad: A way of life for a whole generation of people just wiped clean, and not for the 1st time. It was a slow, lingering death too. People who had kids or drug-addictions clung on, most everyone else trickled away.

PC: It seems like Hulme fostered an atmosphere of goodwill and creativity, with very little hate or abuse in writing, and in general. Is this accurate?

AB: Tolerance was our key to living. On your landing you might have a lesbian commune, an alcoholic Irishman, a little old West Indian lady, a man with Care In The Community issues, a couple of students. Below you might be 3 Traveller caravans nicking electricity from a lamppost; above you might have a Rasta pirate radio station nicking electric from an empty flat. You had to get on with your neighbour. If you wanted them to look out for you, your safety, your property, well then you had to return that favour.

When Granada TV came to Hulme to film Cracker and used the estate as a backdrop it led to a community stand-off. Locals kicked off when the production crew, unable to find suitably offensive graffiti, decided to add their own. Local people were outraged because those kinds of opinion were not stood f or. Not on the walls of Hulme. Not in the pubs of Hulme. Lots of BNP & NF slogans had to be painted-over once filming had finished so that Granada TV were (only then) able to retrieve all their camera equipment safely. That was a proud day!

PC: Was there a dark side to Hulme? Were there crime and drug problems?

AB: Of course, lots of drugs. Different strokes for different folks. Punks on amphetamines; Hippies on Moroccan hash; Acid; Rasta’s who’d smoke sensei in the street; Heroin addicts who left syringes everywhere; and prescription freaks on Dexedrine, Valium, Temazepam, Diazaepam; then Ecstasy, Ketamine, GHB, cheap coke, skunk, whatever; all of it, up & down, but I don’t think it was much more than on other estates, just more evident, more obvious, more out-in-the-open. Then crack came into Moss Side and it all got fucked up. There were shootings, beatings & murders.

But I think wherever you find poverty you will find drugs, because it’s a quick way to make money & to escape. But whenever you have heroin you will have crime, simple as. It’s a parasitic problem quite unlike other recreational drugs & addictions

PC: Why did you first start to take pictures of the goings on in Hulme? What inspired you about the place/the people?

AB: I lived through an earlier Madchester period in a big shared-house with a band rehearsing in the cellar & took no photos at all of any of it! Very disappointing, but I was just learning photography. By the time I came to Hulme I was ready & knew what I was doing. Once I felt safe wandering around I started to take my camera out under my coat. Hulme was fast disappearing & I wanted to document its last days, its architecture & the faces of those people I knew then.

PC: Why take a picture of a picture? Why did you feel that it was important?

AB: At first I was just documenting Hulme, and photographing finished pieces as they appeared. Then I realised that context was everything and began to step back; to include the drab background more. You might notice a particularly large or smooth wall would get re-painted afresh, but rarely ever defaced. Once I knew the writers & they trusted me I began to shoot them on black & white film as they painted.

Ultimately though, the estate itself was becoming ephemeral, time passing into history. That tragedy is photography’s gain though. As time marches on, and things & people change, sometimes irrevocably, all that sometimes is left is a ghost in the machine; the photographs we have.

PC: Does the community still have the same sense of respect between artists, and respect for the art?

AB: I think so. What I saw at SMEAR were graffiti artists from London, Leeds, Sheffield, Edinburgh, France, Spain, Holland. There’s a pecking order of sorts but only like any local pub or prison wing: Time served is important to these people. Joking aside, I’ve always found it to be quite an open atmosphere. Though there clearly are ‘beefs’ & people who just don’t like each other, in the main, just like back in the day, it’s not about who you are it’s about what you bring.

PC: How did it feel to be honoured by Manchester in the recent HomeGrown exhibition at Urbis, with so much of your photography crowding the floor?

AB: That was a fantastic buzz, I have to be honest, an honour to be involved. I contributed images to an earlier much-smaller exhibition there on D’n’B music in the North-West. Every time the curators asked the different local heads, promoters, producers, DJs & MCs for evidence they each put my name forward. So they called me up. They had much bigger plans than I could’ve achieved. I’d seen the Hacienda exhibition they had put together the year before at Urbis & they had the same design team onto it. I was impressed so I let them pinch the title from me! I thought it was well put together & well received. It’s a shame it didn’t travel. The real shame of course is that the Urbis closed as an Arts venue.

PC: What did you think about the recent riots in Manchester and around the UK?

AB: Interesting, I thought what happened in London was different, more to do with the long dark history of our Metropolitan Police Force. But what then erupted across the UK was mainly rampant opportunism, fuelled by new media (Blackberry, texting & Facebook), as well as more traditional News media (newspapers & television). Lots of young people who had voted for the 1st time, voted Liberal, and got the Tories. Loads more don’t even bother to vote. Fear of long term unemployment is still seared into the memories of their parents. Student grants are snatched away. There was protest then too. This was another eruption of dissatisfaction.

I was particularly disappointed in Newsnight, for immediately hosting a debate between black Labour MP Dianne Abott, a black educationalist & a former black gang member, with a white chairperson and all the usual scapegoats that they hung on a peg in Toxteth & Moss Side 30 years ago. Namely a right-wing view that rioters were mainly black youths, in organised criminal gangs, who had no respect for authority because they had no fathers at home: This was and still is clearly divisive nonsense.

PC: What are you working on at the moment?

AB: Still poking my lens occasionally out around city nightclubs, which I do less now to be honest. Since the digital revolution in cameras there are many more wanna-be photographers than ever & most cutting edge Manchester club nights are regularly documented & shared on websites or Facebook. Examplemagazine do a good job of keeping their fingers on various creative pulses

I work in an FE college & teach evening classes in Photography. I’m Photo Editor at Examplemagazine.com. Most recent work is with Virus Syndicate press & publicity shots for them. Loving their output more each & every time! But I’m always reppin’ for Manny me.
Check out Al’s work at http://www.albakerphotography.com or http://www.facebook.com/pages/MischiefMakerPhotoTaker