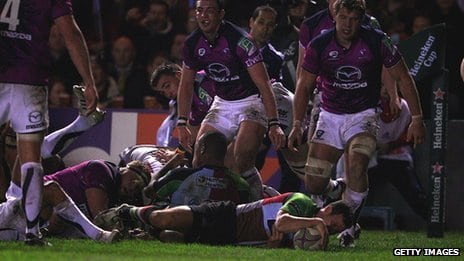 Harlequins had just too much for competition debutants Connacht

With Munster and Leinster securing Heineken Cup victory twice each in the last six years, it’s safe to say Irish domestic rugby’s star is consistently on the rise. Munster have been European heavyweights for much of the last decade – and with players of the ilk of O’Driscoll, D’Arcy and Johnny Sexton – it was only a matter of time before Leinster joined them. Indeed, even Ulster have enjoyed somewhat of a renaissance after reaching the quarter-final stage last season.

Yet as a Sexton master class saw Northampton outgunned in this year’s final, the cheers could be heard out in Galway – not just Dublin – as Leinster’s victory paved the way for Ireland’s junior provincial side, Connacht, to make their first foray into European Club rugby’s premier competition.

It has taken sixteen years of trying but finally the side from Ireland’s wild, windy West have their chance to slug it out with Europe’s finest. It serves as a remarkable achievement for a club who in comparison to their rivals are extremely limited in finances and fan base – and also presents an outstanding opportunity for Connacht to cement themselves as a familiar name on the continent.

The prospect of Heineken Cup rugby may even enable them to hold onto their best talents – the likes of Sean Cronin and Paul Warwick have been lured by bigger sides in recent years. The inevitable loss of their finest players means Connacht’s squad is an eclectic mix of home-groan starlets, such as Tiernan O’Halloran, club veterans like John Muldoon and Michael Swift, and the occasional international in Johnny O’Connor and talisman Gavin Duffy.

Led by club legend Eric Ellwood, Connacht headed into their first game – away at Harlequins – with the all too familiar title of plucky underdogs.

The two sides clashed in last year’s Amlin Cup, with Harlequins subjecting the men in green to two tight defeats. The English side were also enjoying a club record-equalling start to the season after ten consecutive victories.

With this, there was an air of inevitability about Connacht’s 25-17 loss at the Stoop. In an intense, physical battle, Connacht outscored ‘Quins by two tries to one and dominated for much of the game – but the boot of Nick Evans proved to be the difference between the sides.

Yet despite the loss, it was a positive debut for Connacht.

They now prepare to welcome the aristocrats of European rugby – the mighty Toulouse – to the humble Galway Sportsground.

The French giants may have four European Cups under their belts – but not even they will fancy the trip west.