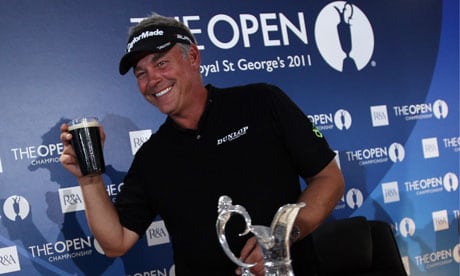 The 2011 major calendar was bookended by disappointment – Rory McIlroy’s capitulation from a seemingly impregnable position in the US Masters and Keegan Bradley’s play-off victory in the USPGA – but in-between came two moments to savour.

The year’s opening major – The Masters – was won by South African Charles Schwartzel, but it was Mcilroy who made the headlines at Augusta. The young Belfast man went from the sublime to the ridiculous, storming to -12 over his opening three rounds only to see his four shot lead disintegrate after a final round 80. In contrast tournament winner Schwartzel finished his weekend with a stunning 66 – including four birdies in the final four holes – holding off Australians Jason Day and Adam Scott, as well as a resurgent Tiger Woods, in the process.

The headlines focused on McIlroy however, and whether at the age of 21 he possessed the mental resilience to match his precocious talent.

Yet two months later at Congressional Country Club, McIlroy became the youngest winner of the US Open since 1923, smashing records and silencing doubters in the process. Memories of his Masters meltdown were banished as rounds of 65, 66, 68 and 69 saw him romp home eight shots clear of the field – his final score of -16 the lowest in tournament history.

But it was another, rather unlikely, Northern Irishman who stunned the galleries at the British Open. Royal St. George’s, in England’s Deep South (a 600 mile round trip for this intrepid, slightly stupid, reporter) was wet and wild – undulating, windy and a far cry from the pristine conditions at Congressional McIlroy revelled in. It proved however the perfect stage for Darren Clarke – almost twice the age of his compatriot – to win his maiden major championship.
Clarke – one of golf’s most likeable characters – was playing in his 20th Open championship, and his final score of -5 saw him fend off Americans Dustin Johnson and Phil Mickleson to become the first man from the home nations to lift the Claret Jug since Paul Lawrie in 1999.

The image of Clarke sitting proudly with the famous old trophy and a pint of Guinness epitomised the spirit of golf’s most famous tournament – his victory the perfect tribute in a week the sport’s great and good gathered to pay homage to the late Seve Ballesteros.

The year’s closing major, the USPGA, was dominated by America – Bradley defeating Jason Duffner at Atlanta in a three hole play-off – Luke Donald and Lee Westwood the only British interest finishing five shots off the leaders at -3.
But this couldn’t dampen another fine, fairytale year for domestic golf, as Northern Irishmen old and new illuminated the world stage.