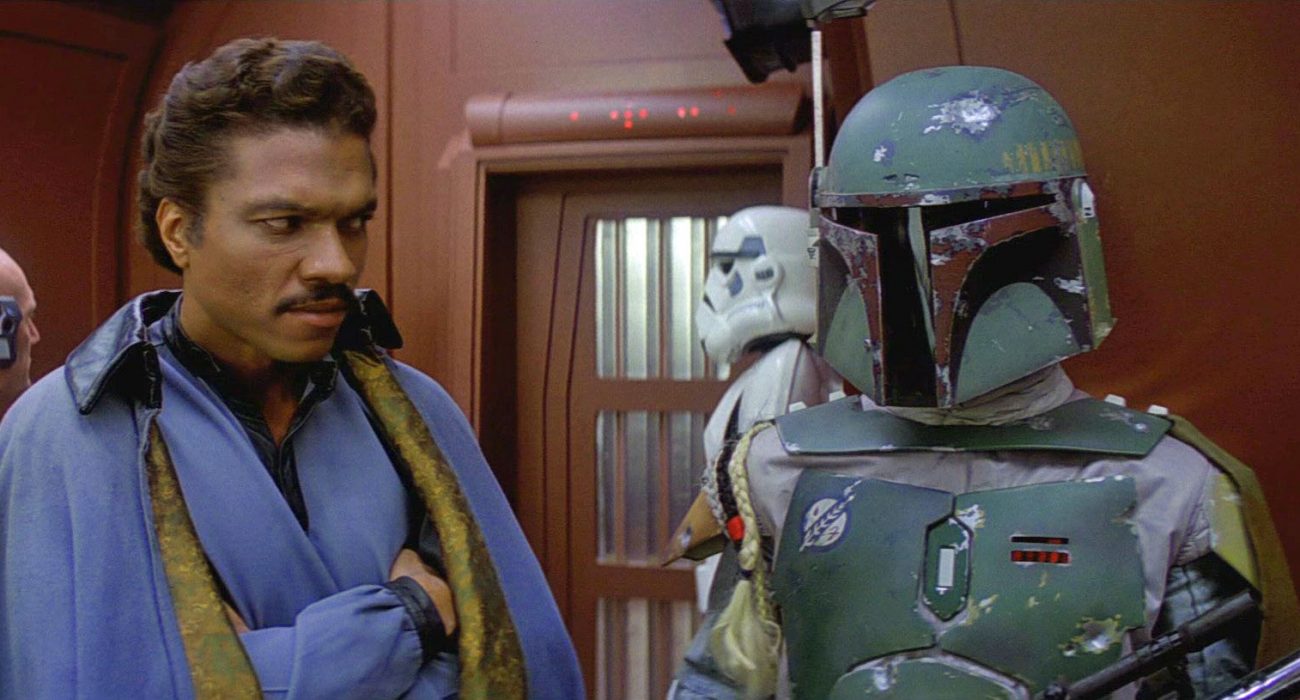 Lando and Boba have a chat

In a vain attempt to continue our series of ‘every film in a day’, my flatmate and I decided to watch every Star Wars film in, indeed, a day. That’s two trilogies, totalling about 12 ½ hours. 12 ½ hours of having baaad feelings about things, but thankfully, only two hours of Jar Jar Binks. We were going to have to start early. I remarked that we probably couldn’t do it, that our chances were 4,756 to one, but Mickey was having none of it: ‘Never tell me the odds’ he said.

Episode I: The Phantom Menace

Blurry-eyed but excited, my flatmate and I bounded down the stairs like Wicket W. Warrick at Ewok Pride. 9 am. Rice Krispies. The universally panned Episode I is whapped on. On comes the Trade Federation aliens and their stupid mock-Japanese voices, but we, at this point fresh as a space-daisy, were perfectly fine to put up with any clods of steaming bantha fodder this film can throw at us. Pod races, Darth Maul, Captain Panaka, constant, dizzying political discussion surrounding trade – this film has it all. In all fairness though, I have a soft spot for this movie. It’s a lot of fun. Jar Jar should have been frozen in carbonite and thrown down a garbage shoot far, far away though.

Episode II: Attack of the Clones

Fired up by a combination of universal ‘good guy’ victory in the first one (bar Qui Gon, God rest his midichlorians) and a sense of worried urgency, we put on the second movie straight after the first at 11.02. Widely considered the lamest of the Star Wars flicks, Hayden makes his debut as moody douche Anakin Skywalker and hacks up a few sand people. Apart from that it turns out that far from being a malfunctioning little twerp, R2-D2 can in fact fly; cynical marketing ploy Jango Fett plays on fans’ love of a cult character, and Yoda loses all credibility by hopping about like Zebedee. This isn’t the film you’re looking for.

Episode III: Revenge of the Sith

We were starting to feel the burn by now and decided to have a 20 minute break. Mickey went at something approaching light speed to the shops to get Doritos dippers and dips, and ran home like a Jawa being chased by an angry Wookie. We quickly punched the power on number 3. This is pretty good actually – it’s a CGI fest of the best kind, and that lightsaber fight at the end really is impressive. Turns out that sinister, creepy, suspiciously pale and Dracula-esque old chancellor is actually evil (who’da thunk it?), and spends the entirety of the film cackling about ‘absolute power’. It was about quarter to four before Vader screamed ‘NOOOOOOO’ and it wrapped up.

Half way through now. Luckily, the better half was to come. Ate three crunchies for morale boosting purposes, then dossed around until five and suddenly panicked that we wouldn’t be able to finish. On goes A New Hope, and Luke and the gang visit one wretched hive of scum and villainy after another. Luke joins the rebels after he finds the charred remains of his aunt and uncle and with a hop and a skip he destroys the Empire’s main space station. ‘ARRRRgh!’. What’s that, Chewie? This film’s incredible? Sure is!

Episode V: The Empire Strikes Back

What an incredible film you’ve discovered! As one of the all time great sequels, this introduces strong new characters including Lando the scoundrel, Yoda the puppet and Boba the mute. We couldn’t fully appreciate its true majesty because our eyes were starting to bleed by this point, but safe to say it was still mildly entertaining to watch Luke’s reaction to Darth’s daddy claim. As the credits rolled at 9.30 we were feeling about as good as Jabba’s personal toilet assistant. Mickey claimed that he might have to lie down, but that was met with hard rebuke from all sides. Evacuate? In our moment of triumph? I think he underestimated our chances.

Episode VI: Return of the Jedi

We’re all clear, now let’s watch this film and go home. It’s 10pm. Our eyes sting and our arses ache. This has been an absolutely unbearable experience, but we must soldier on. In case you don’t remember, it’s no moon, it’s another space station. Stop making that mistake. Only this time, they designed it with an even bigger weak spot! So big in fact, that even forest teddies can play quite a big part in taking it down. Luke saves papa Darth and Lando holds up the Death Star’s reputation for being obliterated with minimal effort. Things were bad, but now they’re good. FOREVER!

Once the Ewoks had had their tree party we went to bed for a night of throwing up and crying so fast I think we could’ve made the Kessel Run in less than 12 parsecs. Thoroughly updated on the inner workings of the force, there was little more this experience could teach us apart from that we never wanted to do it again, ever.