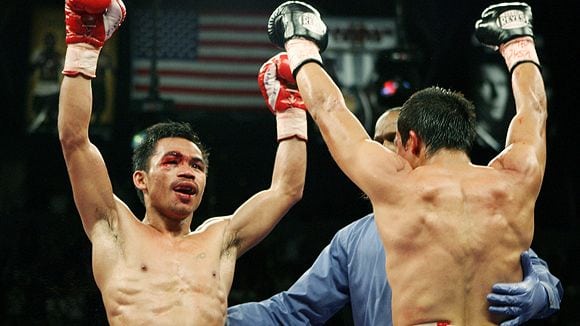 Is ‘Pac-man’ ready for Mayweather?

As the crowd at the MGM Grand roared in anger and disbelief, American boxing supremo Floyd Mayweather must have been rubbing his hands with glee. A controversial points decision in Las Vegas last Saturday saw Manny Pacquiao retain his WBO Welterweight title at the expense of Jan Manuel Marquez, setting up a potential showdown with Mayweather which is likely to see the two fighters bag an astonishing £ 47 million each, although Mayweather may have to wait until Pacquiao has fought Marquez again after this controversial victory.
Pacquiao, known as ‘Pac-man’ due to his all action style is widely regarded as the best pound for pound fighter in the world having been champion across eight different weight divisions. On the basis of his performance however this mantle is now in doubt. The fight was exceptionally close with Compubox statistics showing that the reigning champion landed 176 punches to Marquez’s 138. Many however still felt that Marquez had the edge as was seen by his reaction at the fights end which was one of celebration as Pacquiao slunk back to his corner with his head bowed. It was therefore a surprise when the judge’s scores were divided, with two going to Pacquiao and one for a draw. Marquez, for whom this was a third defeat against Pacquiao was in a state of disbelief claiming “he was robbed”. Numerous boxing experts were certainly bemused by the result. Even Amir Khan, Pacquiao’s friend and sparring partner was in shock, stating “I thought Marquez had won maybe by one or two rounds”. The consternation over the result has led to preliminary talks being held for a fourth bout between the two with even the victor himself seemingly willing to fight the Mexican such was his disappointment at his performance.
For the Mayweather team this will be a blow as they felt that their time has finally come to try and stage what could be the most lucrative fight in boxing history. Pacquiao’s promoter Bob Arum stated the showdown with Mayweather was still on the cards. The potential fight date is set to be sometime next summer.
The WBC Welterweight champion certainly seems to think he has the fight coming and has already begun the usual trash talk. His joke in the after math of Pacquiao’s win was that the Filipino was “slowly changing”, a sly reference to his tight victory over Marquez being a product of not having taken performance enhancing drugs. This dig is undoubtedly borne out of the controversial circumstances that saw a breakdown in negotiation between the two fighters representatives two years ago, when disagreements over random blood and urine tests prevented a successful deal being struck.
This gritty display against Marquez perhaps illustrates that the wonderful career of ‘Pac-man’ is on the wane, his almost god-like status in his homeland which has seen numerous political and business commitments having affected his performance in the ring. Mayweather will certainly fancy his chances. The fighter, who burst onto the boxing scene by winning a bronze medal at the Atlanta Olympics employs a similar counter punch style to the one which Marquez thought had secured him victory, however he is a different beast, quite simply bigger stronger and faster than Marquez as he showed in a comprehensive points victory over the Mexican back in 2008. His victory in September over Victor Ortiz was a typically controversial win for the Mayweather. Yet it highlighted the killer instincts that have made him one of the most successful fighters in the last ten years. Pacquiao will certainly need to up his game if he is to match him.