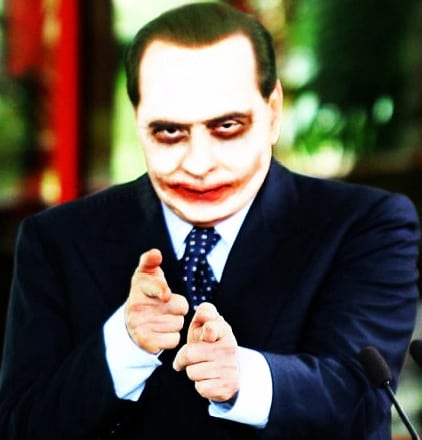 Joker: Berlusconi's constant brushes with the law have become too much for the Italian public

Who’s next in Europe’s game of dominos?

Call me eccentric, but I find international political summits as enthralling as any reality TV show. Not least because the formats are strikingly similar; take a bunch of wide-eyed young hopefuls with supposedly earnest dreams, a never-ending string of scandals and of course the schadenfreude moments of eviction, et voila!

However as I sat chucking popcorn into my open mouth, semi-comatose and absorbing the coverage, it quickly became apparent that this Eurozone crisis meeting was going to prompt a more dramatic flurry of leadership evictions than your average summit.

Far from being the elephant in the room, the Eurozone crisis was a defrosted mammoth bulldozing its way through the EU and G20 summits. Few nails were left unchewed over Greece’s sovereign debt crisis, the scandalous turmoil that grips Italy or the impatience of countries such as the USA and China, lurking like dragons in the den, preparing to invest their fresh dollar and yuan. Germany’s Angela Merkel and France’s Nicholas Sarkozy sat stony-faced, like exasperated parents at the kitchen table, begging for the children to stop squabbling.

The threat of economic meltdown has kickstarted a trend, with Europe’s leaders toppling at the speed of despotic regimes in the Arab world in this new ‘Mediterranean Autumn’. Former Taoiseach of Ireland Brian Cowen is gone, whilst Prime Ministers José Sócrates of Portugal and José Zapatero of Spain have fallen down the plughole of national debt. It was therefore only a matter of time before Greek Prime Minister George Papandreou crumbled and Italy’s Berlusconi – for the time being, at least – swaggered out of the political arena.

Papandreou, ironically sporting a Monopoly-man moustache, has witnessed Greece plummeting into a chasm of debt, economic inertia and parliamentary problems. Greece’s sovereign debt is said to have been accrued after previous administrations had exaggerated economic figures in order to meet monetary union guidelines, worsened by the country’s high level of tax evasion.

Papandreou entered office in 2009 in optimistic fashion, only for his advisors to rootle through the draws and discover a series of economic graphs with large, red numbers hastily Tippexed out and ‘loadsa money!’ scrawled in Biro over the top. Nevertheless, the EU, the IMF and the European Central Bank were left dumbfounded after Papandreou delayed bailout plans by calling a referendum on the issue. The incredulity of three of the world’s biggest financial institutions spelt the end for Papandreou, who announced his resignation on the November 11. Another one bites the dust.

By the end of the following day, Silvio Berlusconi had finally been ousted. Certainly, Italy has economic problems of its own; boasting more than €1.8 trillion worth of debt, it is undoubtedly next on the agenda for Eurozone aid and severe austerity measures. But that’s not quite what most protesters had in mind when chanting ‘buffoon’ and ‘clown’ at the Prime Minister as he left office on November 12. Rather, Berlusconi’s exit marks the end of a platinum era for public scandals, politicised media dominance and a font of satirical material. Holding the office of Prime Minister for a total of ten years, the billionaire has seen his political career marred by a string of court cases over allegations of bribery, illegal financing, corrupting judges, false accounting and underage prostitution, to name but a few.

Berlusconi is famed for possessing perhaps the most unflappable gumption seen in the modern political sphere. Can you imagine Barack Obama giving his State of the Union address before popping to a court to be tried for embezzlement? David Cameron being accused of heading a ‘vast pimping network’? Herman van Rompuy even uttering the words ‘bunga bunga’? It would seem that after 17 years in politics, Berlusconi’s infamous endeavours evolved into legal and critical immunity. Astonishingly, he has emerged relatively unscathed, with little damage done aside from taking a statuette of Milan Cathedral to the face.

Nonetheless, Italy’s problems are far from over. For months Berlusconi has acted as a flashy buffer against what is expected to become the harsh reality of austerity cuts and further stern glares from Chancellor Merkel and President Sarkozy.

Speaking of the dynamic duo, the question is as to which domino is in line to fall next. Sarkozy faces an uphill battle for re-election next year in the wake of strong criticism from both ends of the political spectrum, having had to answer for a return to economic state interventionism. On top of that, why not call the Prime Minister of Israel “a liar” as well? That ought to round off your stressful schedule nicely, Sarko.

Travel east and Merkel’s support is also dwindling; recent state elections dealt heavy blows to her Christian Democratic Union party and approval ratings have declined. However, Merkel is widely seen as having led the Eurozone through this crisis. She also recently assuaged Germans by announcing a tax cut because, delightfully, they have more money than they thought they had.

The Eurozone crisis is showing no sign of abating just yet, and plans have been announced to formalise this summit into a series of regular meetings. So, I wonder – are there more political dominoes left to fall? Was Berlusconi the only shock exit? Are there further challenges to come? We can only assume that we will find out in the next engrossing episode.

Cat Hanson is a first year Chinese Studies student at the University of Manchester. She contributes to the Politics section of The Mancunion in light of her passionate interest in world leaders and issues of international diplomacy. You can follow her on Twitter @hanson_cat