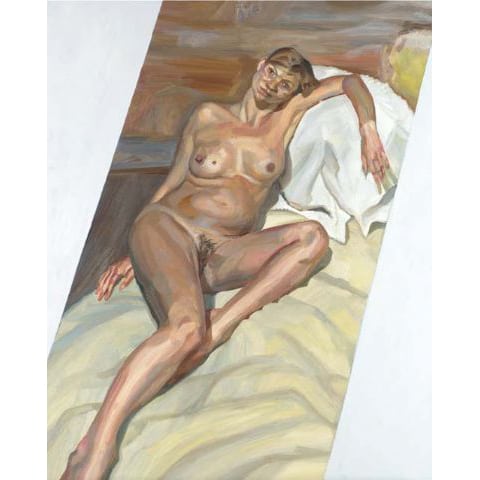 F is for… Freud

‘I paint people, not because of what they are like, not exactly in spite because of what they are like, but how they happen to be’; so said Lucien Freud, the recently deceased grandson of Sigmund, acclaimed artist and friend to a host of international fashion icons. Characterized by his creativity, charm and apparent disregard for what anyone else may happen to think, his life was a tumultuous whirlwind of highs, lows, portraiture and an array of impossibly fabulous people.

Having fled Nazi persecution in Berlin at the tender age of ten, Freud arrived in London in 1933. Following such a terrifyingly intense start in life, including a stint as a sailor in the merchant navy during the Second World War, he later moved to Paris, where his apartment bordered on that of Jean- Paul Sartre’s.

A friendship with Kate Moss originated through an introduction via his daughter Bella, a designer whose company logo is an illustration of her irreverent father’s. His interest in her career plus Kates’ love of sitting for him combined with his adoration of parties and socialising meant that he continued to be a regular at glitterati events well into his old age.

Despite a gambling habit which saw him accrue some mountainous debts (which unfortunately coincided with a period in the eighties in which his often brutally realistic paintings went out of fashion) Freud managed to make his work relevant again in later years. Flawed in his youth through an often selfish predisposition, his older years saw him take on a slightly more contemplative air, with an adoration of his children allowing him to compensate for bouts of absenteeism in their childhood.

A remarkable life, in which zig zags across the world allowed him to fit more into one lifetime than the majority of us could dream of, and renowned for his charisma and talent, the memory of Lucien Freud is sure to persist through the legacy of his fantastically intriguing portraits.