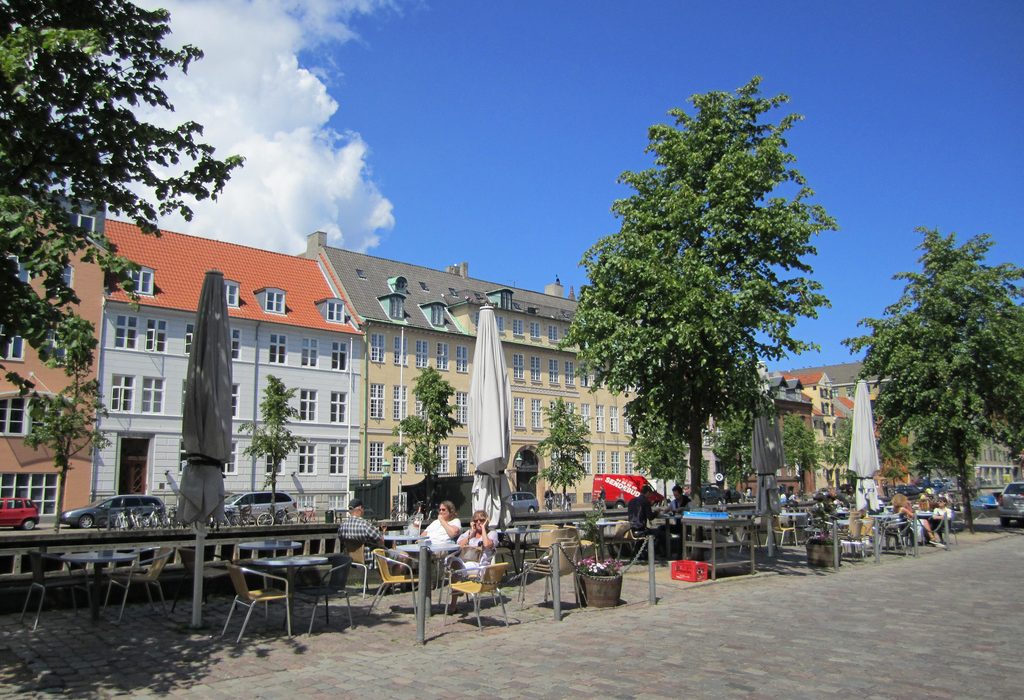 Copenhagen is a city I wish I had explored more regularly on my year abroad; living over the Oresund bridge in Sweden, it was my sanctuary for all access off licences, curfew free partying and general roguery. It holds a sophisticated demeanour with Parisian style grand boulevards and regal castles around sleek Scandinavian architecture,yet has a rebellious streak carefully sectioned off in the free town of Christiania as though to keep it from wider influence. Though quite small for a capital city and structured with a faultless metro system don’t be deceived; its vastly contrasting neighbourhoods laced with intertwining streams make it difficult to navigate so you get your head down at the Generator hostel perfectly located downtown, grab your furs and get a gulp  of that icy Nordic air.

Stroget is the flash lit emblazoned tourist trap complete with mandatory Irish pubs and enticing winter markets. This neverending street begins at Copenhagen’s main square Kongens Nytorv passing the town hall and old medieval churches all the way to fantasy theme park Tivoli. With unique Danish boutiques its clear why Copenhagen is the design capital of Europe, its grandeur stretching from the flagship H&M to Christiansborg palace. If you’re a fan of extreme sports climb one of the churches’ spindly spiral staircases for staggering views of Copenhagen and beyond, and theatre aficionados must see the Dogma Theatre dedicated to play directing and filming in the style pioneered by Lars Von Trier.

As far as Danish cuisine goes, unless lead weighted rye bread and pickled herring amidst luminous beetroot coleslaw floats your boat, there’s not much foodie gratification to be had on a budget. I stuck to the trusty diet of street sold kebabs and Danish pastries – pick up the original and best hot cinnamon rolls at Lakagehuset bakeries dotted round the city which you will locate by sniffing.

After hours head to Gothersgade (metro: Kongens Nytorv) a strip of bars adjacent to the Generator, or simply stay in the hostel bar for Copenhagen’s longest happy hour.  Later on head to Dunkel (Radhuspladsen) for DJs mixing til 7am.  Smoking inside is  encouraged as is grinding and club necking, and the resident professional hipsters extend the Scandivian indifference to gender stereotypes by sharing saloon style dark toilets. If you’re luckily enough to pass as Danish or at least pass the outfit examination, well done.

Christiania, Copenhagen’s own anarchist free town sectioned for radicals and statement law breaking, is an essential visit. A police banished playground defined by marijuana and squat houses, it seems a world away from the catwalk that is the main shopping strip, and its ghetto attitude and live graffiti-ing aplenty. It gives this ghetto the air of a battle turf-come-exhibition and unlike anything you will have come across in such a prim and otherwise perfect city. It’s a shame cameras have been unanimously banned by occupants of this shanty town, as a photo is required to prove the prices of beer (20 DKK a bottle) in comparison to the extortionate robbery of the rest of the city.

The ‘centre’ is host to grungy bars, a dodgy clientele and an apparently abandoned stage Iwhich is a shame as I can imagine the festival feeling this place could exude if a band were to play out to drunk or stoned skinheaded Danes and Brits high on the unfamiliarity of such political harmony.

Take in Copenhagen in all its glory and let its vast classiness knock you dead.

Stay in the Generator Hostel from £26.60

Fly with Easyjet from Manchester in November from £40 return