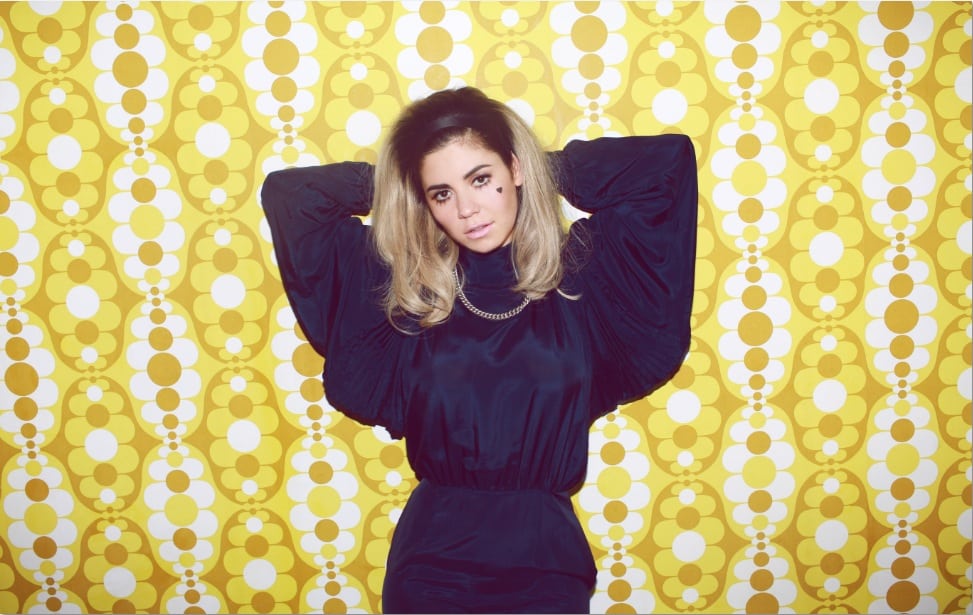 2012 has been a transformative year for Marina & the Diamonds.

“I’ve tailored the tour around the album. It’s called the Lonely Hearts Club, based on the assumption you’re going to be alone forever.” Tongue in cheek as it might be, the negativity of that mindset is an undeniably confusing one given the year Marina Diamandis has had; her electronically-fuelled second record, Electra Heart, hit number one in the UK album chart in May, and she spoke to The Mancunion from Leipzig, Germany, on one of the final dates of what’s been a mammoth summer tour.  Whilst divulging some of the obvious perks of being a part of such a huge production – supporting Coldplay in stadiums across Europe, she’s clearly keen to be back out playing to smaller, more devoted crowds at her own shows in the coming weeks.

“Coldplay’s the nicest tour you can be on really – the crew are fantastic, you get gourmet catering every day, and as a performer, it’s great to have the challenge every night of trying to hold people’s attention, and convince them to check you out after the show. But you can’t lie, your own shows are obviously much more exciting in the sense that people are there for you.” The tour’s stage production is set to reflect the new album’s themes, particularly in terms of the influence of Americana – “it’s based around a motel bedroom – there’s a chaise longue, hat stand, fizzing TV – girly fantasy stuff. The whole album’s based around American pop culture.”

Electra Heart follows Diamandis’ 2010 debut, The Family Jewels, and signals a radical departure, both musically and in image terms. It’s a concept album developed around an ‘Electra Heart’ alter-ego, that she’s previously described as “the antithesis of everything that I stand for,” but the term ‘concept album’ doesn’t necessarily mean it’s a thematically over-complicated record, as she explains: “it’s about love, basically, in the same way that so many pop albums are about love. The difference is that I wanted to create a fictional character to enable me to talk about having a fear of love, and the pain that can come with it, without having to apply it to myself and be embarrassed about talking about it.”

On the image change that has encompassed the record’s artwork, videos and her own fashion sense, she told us, “on the first album, image didn’t inspire me at all; fashion didn’t have any bearing. On this record, it was much more heavily inspiring in terms of the way I wrote the songs – the idea for the first track, ‘Bubblegum Bitch’, came when I was buying dresses in a thrift store – it got me thinking about that pop persona from the nineties that artists like Britney Spears had, and it made me want to turn that inside out, by creating this villainous character.”

Diamandis also took the opportunity to set the record straight on her apparent claims that the UK ‘didn’t get’ Electra Heart, which she claims had been taken out of context; “the people I was talking about were the indie, leftfield press, rather than the people of the country I’m from. The UK press took the album too literally, and how can you take a song like ‘Bubblegum Bitch’ or ‘Homewrecker’ seriously? It’s obvious I’m joking.”

She also stressed that her pronouncement of having achieved ‘fuck all’ with her first record was more a symptom of her ambition than a reflection on the album itself: “it did really well for a leftfield album, but I was ambitiously disappointed in that I wanted to do bigger things…it’s weird how that’s seen as a bad thing. Every artist wants it. That’s why the new album getting to number one was such a big deal for me; I feel like I’ve broken through as a pop artist. I didn’t ever want to be an indie artist.”

Marina and her Diamonds – the latter, she says, being her fans rather than her backing band – visit Manchester twice in a week at the end of the month, with a headlining performance at the inaugural M13 festival preceding her own headline show. “I fucking love Manchester. I’ve always had big gigs there and always had an amazing time, although I suspect I’m not alone in that.” She’s less enthusiastic, though, when we tell her that M13 is to take place post-Freshers Week; “at least their hangovers can’t get any worse,” she groans.

She’s a little more guarded when it comes to discussing the video for new single ‘How to Be a Heartbreaker’, which filmed recently; it sounds set to be as divisive as the album it’s taken from. “All I can say is that it involves a lot of naked men,” she laughs, “and we’ll leave it at that.”

Marina and the Diamonds headline M13 Festival on September 29th, and play Academy 1 on October 6th.