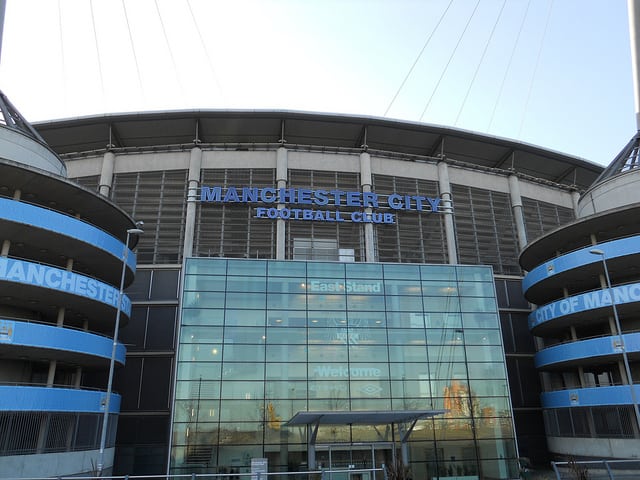 The new academy will be situated right by the Etihad Stadium (Photo: Firing up the [email protected])

Manchester City are set to embark on the construction of a state-of-the-art football academy tipped to be “one of the world’s best” by the club’s football development executive and ex-Arsenal legend, Patrick Vieira.

The project will cost billionaire owner Sheikh Mansour an estimated £100 million and will be ready in time for the 2014/15 pre-season. The mighty 80-acre training complex will reside in the former industrial wasteland in Openshaw West, alongside the Etihad stadium, and will replace City’s former training ground at Carrington.

The proposed academy and training ground will be used by both Manchester City’s first-team and youth-team players, and will include a 7,000-seater stadium, 16 full-size training pitches, a half-size goalkeeper’s training pitch, as well as new club headquarters with a gym, changing rooms and an injury rehabilitation centre.

Arguably the most important aspect of the project will be the new school and accommodation units, built for the 400 academy players, ranging from the ages of 12 to 21. Youngsters will eat, sleep and breathe football in an environment similar to that of Barcelona’s La Masia, an elite academy which has produced some of the best players in world football.

Manchester City will hope to emulate the success that Barcelona have had in producing outstanding home-grown talent. The likes of Andrés Iniesta, Xavi and Gerard Piqué all passed through the La Masia academy, alongside current Ballon d’Or winner, Lionel Messi. Unlike many English clubs, the Spanish giants are renowned for producing their own players and have subsequently been less reliant on expensive imports.

City are keen on producing home-grown talent not just for the progression of the club, but also to abide by UEFA’s Financial Fair Play regulations. The UEFA ruling comes into effect this year, and states that clubs that do not break even will be financially sanctioned. However, it seems hard to imagine that City will suddenly stop buying the world’s finest players, especially if they fail to retain the Premier League title this season.

If the academy succeeds in its objectives of producing the next generation of football’s biggest superstars then surely the dream of England winning another World Cup looks a more realistic prospect. Spain have reaped the rewards in terms of national success, winning the last three major tournaments with a team that included several La Masia graduates.

For Manchester City this is by no means going to be a quick-fix. Patrick Vieira has stated that it could take as long as ten years before City will be able to fully exploit the fruits of its multi-million pound complex. It should be noted that while Barcelona started nurturing young talent through their academy over 30 years ago, it was not until relatively recently that Spain became the dominant force in world football. City fans will argue that they are more concerned with producing their own talent rather than building the future England side, which is undoubtedly a long way off.

Manchester as a whole will also benefit in more ways than one. The club hope to create around 160 construction jobs and 95 permanent jobs, at least 70% of which will go to local workers. City also propose to plant 2,000 trees (in the interest of protecting the local environment) and have set aside over five acres of land for a Sixth Form college and high-tech sports science institute. City bosses have also promised a number of local schools that they will be able to play up to 10 matches a year in the 7,000-seater stadium. In this way the club hopes to carry on the regeneration of east Manchester, which began 10 years earlier with the 2002 Commonwealth Games.

It seems a lot of good could come of this venture, not only in terms of nurturing young footballers, but in benefiting the community of Manchester as a whole. As an English football fan, it’s good to see that Sheikh Mansour is spending his petro-dollars on something other than lining the pockets of big-time footballers such as Samir Nasri and Mario Balotelli. English football will develop as the academy aims to re-define the English game through its modern training methods, tactics and regimes.

Many clubs such as Arsenal and West Ham currently have successful youth academies, although the sheer scale of the Manchester City project will force the rest of English football to keep up. This can only aid the progression of English football, which is increasingly falling behind the rest of the world in terms of national success.