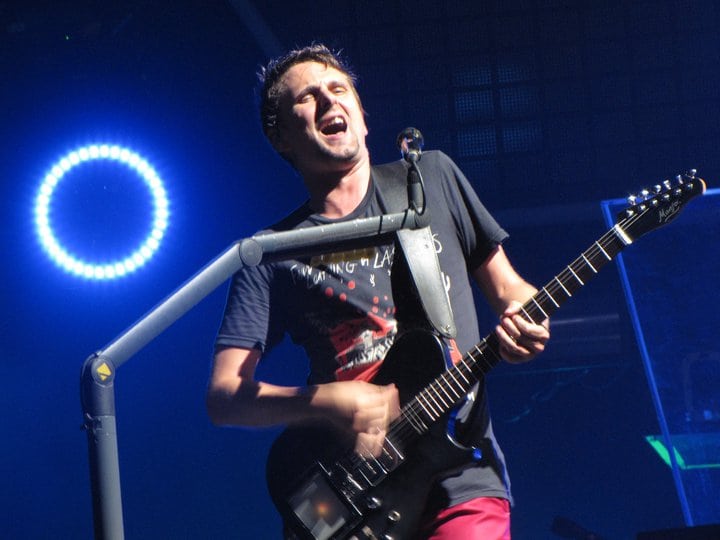 Column: We are not amused

Last week, Muse reiterated their seemingly fervent ambition to try and fuck up everything that they have achieved in the past decade or so.  The release of The 2nd Law – their sixth studio album – has confirmed our fears that, as a band, they’ve either completely lost it or they just can’t be arsed anymore.

Now I’m sure I’m not alone in saying that I used to have a lot of time for Muse.  The first three records are expertly crafted examples of a band doing what they do best, particularly Origin of Symmetry and Absolution, which have to be up there as two of the best alt/prog rock albums of the 00’s.

Take nothing away from Showbiz, but the sheer production and arrangement quality of these two records is unparalleled.  Tracks like ‘Space Dementia’, ‘Bliss’, ‘Apocalypse Please’ and ‘Stockholm Syndrome’ exhibit Matt Bellamy’s soaring falsetto and Chris Wolstenholme’s distorted bass at their very best.  Dom Howard is pretty good for a southpaw too.

But even out of the studio, by the time they played their two-date spectacular at Wembley Stadium in 2007, the trio were being heralded as the best live act in the world.   Their shows, like their music, became increasingly influenced by science fiction and included giant satellite dishes, translucent sets and a light show that could rival the Death Star for the amount of lasers it contained.

Looking back though, this was probably the beginning of the end for Muse.  It was never going to be easy to follow an album as grandiose as Black Holes and Revelations, and, having toured off the back of it for over two years, the challenge to continue to evolve was greater than ever.  Unfortunately, the lukewarm reception that 2009’s The Resistance received seems to have done little to shake the life back into Bellamy and co.

What gets me is that, usually, bands struggle with their second album.  Should they keep it along the same lines as the debut, or should they make a radical departure into pastures new?  For the first four albums, this was never an issue for Muse.  They gradually developed their own style and sound, their own political/sci-fi context, and in the process, gained legions of dedicated fans.   Their method was by no means broken, but unfortunately for us, they decided to fix it anyway.

I must say at this point that I was nearly sick when I heard the official Olympics song.  ‘Survival’ is five minutes of overblown pomposity and includes some of the most moronic lyrics I’ve ever heard – “Yes I am prepared to stay alive / I won’t forgive, the vengeance is mine.” – eh? I never knew that  vengeance played such an integral part in the pinnacle of sportsmanship.

Worse still, following a flurry of bad reviews, Dom Howard stated that he “didn’t care whether people hated the song or not, as long as it provoked a reaction.”  That’s like Kebab King saying, “I don’t care if the donner meat gives you food poisoning or not, we’re still getting paid regardless of how much you vomit.”

As for the rest of The 2nd Law, Bellamy has traded in any thought-provoking lyrics for a plethora of what can only be described as funny alien sounds.  Also, why they’ve even considered going down the dubstep route is completely beyond me.  Fair enough that they want to try to implement new styles and genres but some stones are definitely better left unturned.  You wouldn’t see Burial doing a cover of ‘Time is Running Out’, would you?

I do hate to say it but it seems like that’s it from one of the best bands of this generation.  There’s no shame in throwing in the towel when you’re at the peak of your powers, because at least you recognise that you’ve achieved all that you set out to achieve.  It’s the classic Fawlty Towers situation.   Sadly, there is shame in releasing an album that is no more than a lackadaisical attempt to get an established band back in the pop charts.