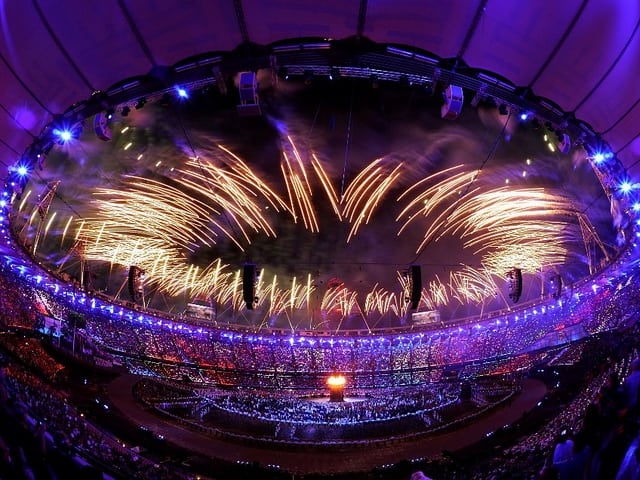 Tens of thousands of volunteers contributed to the success of the London 2012 Olympics (Photo: Panasonic UK)

‘I made the Games’: a volunteer’s account of the London Olympics

Two summers ago, the thought of becoming a Games Maker seemed pretty unfathomable.

The Olympics were in the distant future and ‘Games Makers’ sounded like something off the Hunger Games. When my family persuaded me to apply for a volunteer role, I was initially sceptical; I never believed I would be chosen to play such an active part in London 2012.

The whole experience came around unexpectedly. A year after applying, I received an email asking me to attend an interview in London. I thought it went terribly, as I seemed to respond to every question with the same answer (‘Yes, when completing my Duke of Edinburgh award I was faced by a challenge…’). My sense of foreboding was, however, unjustified, as I soon found out I had been selected to become a London 2012 Games Maker.

Many of my family had also applied, and none of them had even got interviews. I was astounded to be chosen, and this was before I even knew what my job would be.

After attending my first training date, I discovered that I was to be an athlete escort for the swimming victory ceremonies.

Two athlete escorts appear in every medal ceremony. They have to brief the winning athletes on the logistics of the ceremony backstage, and then take them through the route to the podium.

We watched a short clip of a Beijing medal ceremony and my mouth literally dropped open. These girls were on camera all the time – and I would be doing the same.

The training itself was good fun. At 3 Mills Studios in London, I finally met my team, and together we learnt our routine. We had stand-in volunteers acting as athletes.

The boys had to perfect their shuffle, turning in sync without dropping the medals (or rather, chocolate coins) and the flowers (broccoli). Us girls, meanwhile, had to remember every point of the brief, in particular Rule 50 – no flags or advertising on the podium.

Just a few months later I was off to Stratford. The Olympics had begun.

Our first day in the Aquatics Centre consisted mainly of dress rehearsals, but the pool was already being used by many of the athletes for training. For the first (and last) time, we sat in the expensive seats and watched the packed pool full of swimmers, who swam constant and consistent lengths.

Even more swimmers were limbering up and stretching with their coaches. It was astounding to see the dedication and determination of these people; they had worked so hard for so many years, and now they finally had the chance to prove themselves.

The first ceremony took place the following evening. After dressing in our costumes we waited in a deactivated shower room (which looked like the setting of Saw) and watched the race on TV – Michael Phelps versus Ryan Lochte in the Men’s 400m Individual Medley.

The result is a shock; Lochte wins and Phelps only finishes fourth. Gradually, the athletes arrive backstage with their anti-doping volunteers, and all of our meticulous planning is briefly forgotten as Ryan Lochte walks in. Everyone in the packed room just stares at him. I’m embarrassed about how truly uncool we look.

As we line up I’m possibly more nervous than the athletes were before their race. I can just sense the next massive YouTube hit: ‘Girl Falls in Olympic Pool’. And then we’re walking out – the roars of the spectators are so loud, I can’t even hear the Chariots of Fire theme tune.

The next few minutes are incredible; camera bulbs are flashing, people are screaming and I’m standing right there, experiencing the whole event!

The rest of the week feels surreal. I get to take part in at least two ceremonies a night, and many of the athletes’ faces soon become familiar; Sun Yang, Yannick Agnel and Ye Shiwen all appear on the podium, along with a Michael Phelps, who by Tuesday was crowned the greatest ever Olympian.

Phelps’ silver medal in the 200m Butterfly, however, was complete surprise, as he was beaten by the little-known South African Chad le Clos. I was lucky enough to lead this ceremony around the pool, and I was in awe; not only at the sheer volume of the crowd, but at the excitement and anticipation as the athletes made their way to the podium.

My week at the Olympics was indescribable. I couldn’t wait for the evening to come, never knowing who we might meet. A few nights were hard work – excitable athletes would frequently run off in the wrong direction (leaving us to struggle after them in devilish heels), but that just made the job more eventful.

I wouldn’t exchange my experience for anything; I made wonderful friends and played an integral part in the London 2012 Olympics. I am now the proud owner of a badge saying ‘I Made The Games’.