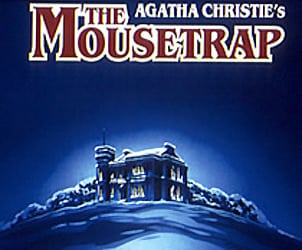 The Mousetrap, whose 60-year performance anniversary is celebrated this year

Must see this week in Theatre: 22nd October-29th October

Light-Hearted Intercourse has its world premiere this week after being unearthed from Bill Naughton’s (Bolton’s most famous playwright) archives and being brought to life by director David Thacker. The play looks at a young couple in the 1920s adjusting to married life whilst keeping secrets from their pasts from each other.

An interactive, 360-degree experience taking place in a ‘secret Salford location’ , exploring communication where there is no common language. Performed as part of the InOnTheAct festival.

Runs until 28th October at The Lowry Theatre

Student Tickets £10 and £5 on a Monday or Friday

Physical theatre piece about a teenage boy who can move objects with his mind, developed by award-winning theatre company ThickSkin.

Runs from  24th October to 25th October at The Contact Theatre

Based on a true story, Obama The Mamba, introduces us to George Hussain Obama, the Nairobi slum gangster and half-brother to the US President. A story about fate, power and destiny.

Runs from 23rd October to 27th October at The Lowry Theatre

Musical about small-town girl, Peggy Sawyer in her rise to Broadway fame. Set during the Great Depression and includes songs like ‘Lullaby of Broadway’ and I Only Have Eyes For You’.

Runs from 23rd October to 27th October at The Palace Theatre

The world’s longest-running play ever, Agatha Cristie’s The Mousetrap comes to the Manchester Opera House this week on a tour marking its 60-year anniversary. Come be apart of theatre history in this classic murder-mystery play!

Runs from 22nd to 27th October at The Manchester Opera House