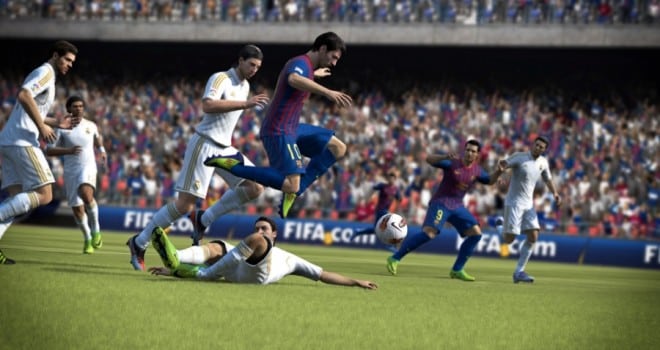 Messi tears through defences in FIFA 2013

It’s that time of the year again, EA and Konami resume their yearly conflict. However, this might be the most impressive battle of the last decade. A week after Konami released its gem, PES 2013, EA responded with a beauty of its own, the latest from a franchise soon celebrating 20 years, FIFA 2013. Even though this is mainly a review of the latter, it cannot go unnoticed that PES 2013 have taken huge forward strides.

Once again, FIFA has taken the next step in creating the most stunning piece of its franchise yet. The stadiums are vibrating, the chants are louder, the colours are brighter and the passion of the game seems to flow all around the world. But, this might not be enough to convince the real players of any change at all.  Has the presentation been improved? Yes! Has the interface been improved? Yes! Are there new game modes available? Yes! You notice the trend there. Lots of positives to be honest but no marquee change to be honest. But, is that such a bad thing? FIFA 2012 was after all the complete game.

Having a look at the teams, there might be some injustices, as always with FIFA. Juventus, the unbeaten Italian champions, are not impressive, Chelsea might be a bit too good (European champions I know, but still), Arsenal have been overestimated and some of the slightly weaker teams have been underestimated. Nonetheless, Barcelona and Real Madrid are still well above the rest, followed by the evenly rated Manchester United and Manchester City. This might spice up the games when playing online, even better with the Match Day option. If you look at the players as well, some ratings really make no sense. Along with the brilliance of Messi, Ronaldo, Xavi and Iniesta, it seems incredible that Ribery is on par with them. Same thing for Vidic; he’s a great defender sure, but after a whole season out and obvious signs of a decline, 88 might be a little too steep. But overall, the players are worth what EA have granted them.

Not much to account for in terms of gameplay either. Improved and much more fluid dribbling skills are a plus. First touch control is a bit harder so this bodes well for players who like a challenge and like the passing game. There appears to be an improvement in the artificial intelligence with smarter runs and better positioning. The franchise has also tried to show that even more than spectacle, realism has been preferred. So, you can forget about dribbling with Sylvain Distin or scoring a scorcher with Jamie Carragher. Talking about defenders, we’ll move to the main drawback of the game. The defense is very poor. Too many mistakes that might take out the fun of the game sometimes, even more during tight games. On the other hand, the online mode is as impressive ever.

FIFA 2012 was a revolution, the most complete football game ever made. FIFA 2013 is an improvement on that, no marquee changes but still it remains the best.