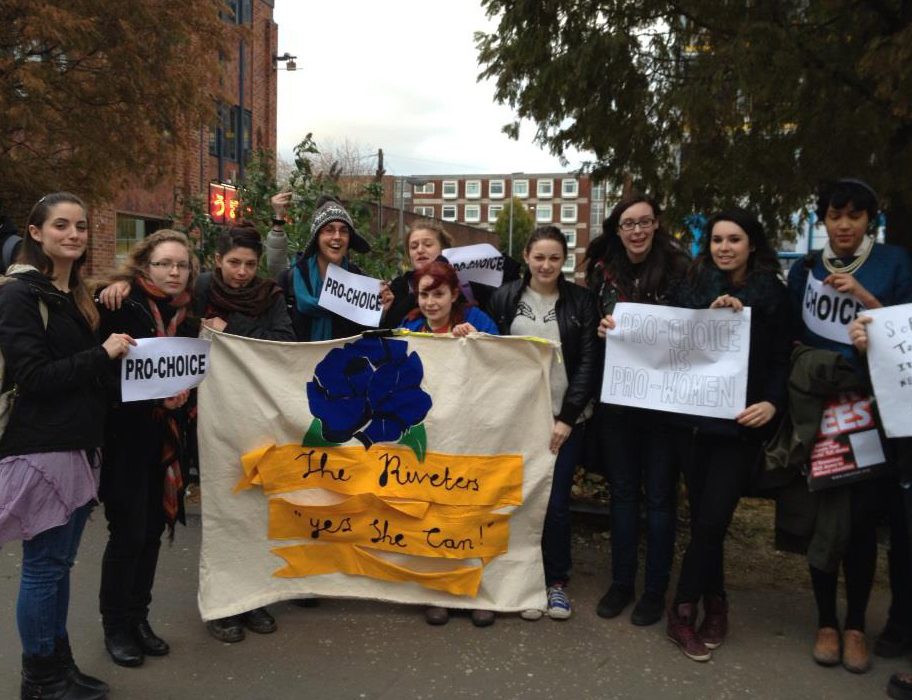 The counter-protest team with their banner to cover Abort67's images. Photo: Cat Gray

The notorious demonstrators, Abort67, describe themselves as a “public education project” and believe that “the most effective way to change public policy is to first change public opinion.”

Their method of doing this is to display images of “the reality of abortion.”

Earlier in the day Abort67 tweeted: “In #ManchesterCentral by #mariestopes saving babies from #abortionby #exposing the #truth.”

Catriona Gray, University of Manchester Students’ Union Wellbeing Officer, heard from students that the group were in Manchester and so rallied together a protest group.

“We were aware that Abort67, who are an anti-choice lobbying group were planning to come on campus. The point of them is that they go around different universities trying to intimidate students with really massive graphic images of foetuses,” she said.

“It’s a really hateful ideology to be presenting people with I think.”

Catriona explained how she heard that the group were near the Aquatics Centre on Oxford Road, having previously been in Fallowfield: “We just got as many people together as possible to do a counter protest,” she said. “That involved getting a big feminist banner and trying to block what they were showing: their really graphic images of foetus terminations.”

Both Catriona and Manchester’s Women’s Officer, Tabz O’Brien-Butcher, tried to raise awareness of the group’s presence in Manchester on Facebook, encouraging students to join them in protest: “We need to organise a counter demonstration to let these people know that they cannot come and intimidate women students on our campus! Spread the word!” wrote Tabz.

Catriona told how the group used a banner from the University of Manchester’s women’s rights collective, The Riveters, to cover up the images, emblazoned with the slogan: ‘Yes she can.’

“There were about 15 of us counter protesting against them and at one point we got to about equal numbers when there 10 of them. There were a lot of men as well as a few women,” she added.

As they began to chant, the protestors began to disperse. “My body, my choice,” “Not the church, not the state, women should control their fate” and “Pro-life men have got to go, when you get pregnant let us know!” were among the chants.

“They’re fairly well known for these tactics and for going around and targeting different campuses and students especially. They think that they can influence young people. They just use very intimidating tactics,” said Catriona.

In the past month, Abort67 have visited Nottingham, Sussex, London and Cambridge universities to protest, as part of a ‘November tour.’

They have tweeted their dismay at the counter-protests on these campuses, calling it a “nationwide cover-up project.”

After their demonstration in Nottingham, the women’s society created an online petition to bar Abort67 from staging any future protests on any university campuses. It has only secured 65 of the 6,000 desired signatures.

Nottingham SU strongly spoke out about the protest, saying: “Abort67’s intimidation and graphic propaganda could result in students feeling harassed and victimised.”

Women’s Officer Tabz congratulated everyone who took part in the counter protest on Facebook: “Well done everyone that came to the protest against Abort67! You are all awesome!”