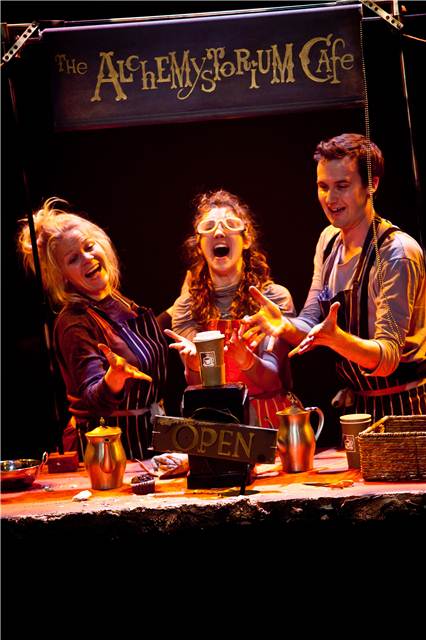 The Alchemystorium at The Studio, The Lowry. Photo: The Lowry

My brother is not my keeper

In the week that President Obama has been re-elected for an historic second term as America’s first African American president , the story of Obama the Mamba reminded me of just how remarkable it is that someone with as rich a background as his has made it to the White House in the first place. But that is not to say that this is story of Barack’s remarkable rise to power against the odds. Far from it. In fact the story of George (Clifford Samuel) would be a fairly ordinary one if it weren’t for his famous half-brother.

But neither does the story dwell on the great differences in the lives of the two Obamas. George Obama is fiercely proud of not only his name, but his country and his identity. There is no envy towards his older brother only pride and even at times pity that Obama does experience the world he does. George tells his life story with vigour and enthusiasm highlighting the pressures of growing up in Nairobi with his famous surname. The play balances the comical and serious sides of George’s story well,flitting between different periods in his life so that we get a true sense of his development from energetic teenager to more worldly adult.

Samuel is an immensely likable lead and imbues the story with enough energy and humour so to keep an audience’s attention which can so easily slide in an one-man play. Even in the story’s darker moments, Samuel makes sure that the positive message of the play always shines through.

The contrasts which are made between the lives of the two brothers are never crass or heavy handed. Indeed George’s own version of the President’s 2008 victory speech that he makes to his local football club is subtle enough to be charming but pertinent enough that you are still struck by the great gulf in the life experiences of the two brothers.

The imagined conversation which George has with the President in the play’s denouement is striking and emotional: as George attacks Barack for the hypocrisy of the West in their judgement of the people of Kenya. Here the play takes on a more overtly political tone which I wished had appeared earlier, but it nethertheless serves as a fitting closing  reflection on the prejudices and assumptions we make about other countries, whilst still maintaining George’s optimism for the future.