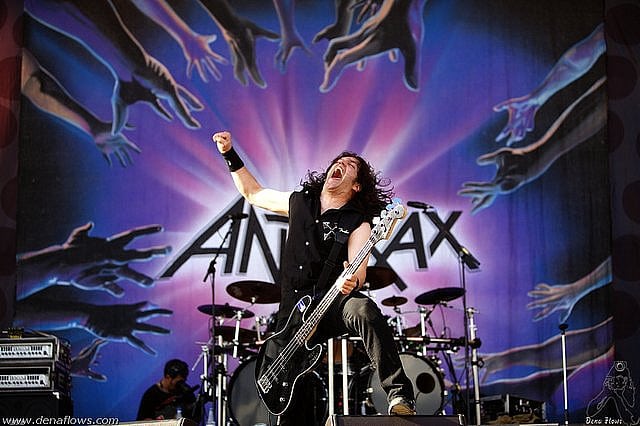 Anthrax warmed up the Apollo for Motorhead with an uneven set. Photo: Dena Flows

Music is subjective, and the fact that Anthrax have amassed over fifteen million in album sales is a testimony to their popularity amongst heavy rock fans. Tonight’s performance, however, highlights the very fine line between heavy rock song writing and unintelligible noise.  On a joint tour with rock legends Motorhead, the fact that many of the attendees are sporting earplugs sends a message that sometimes even the fans have trouble with the barrage of din emanating from the abundance of Marshall Amps populating the Apollo’s stage.

Opening their set with a flurry of new songs from 2011’s Worship Music, the crowd create a sea of devil horns which are thrusted in time to the power chords that dominate opening numbers ‘Earth on Hell’, ‘Fight Em Till You Can’t’ and ‘Antisocial’. The chorus to ‘Antisocial’ is essentially a description of the ‘greebos’ in attendance. There is one in every hall of residence, every place of work and every college classroom in the country, the giveaway being an unkempt moustache, the owner of which is ready to donate it to the nearest pubic wig factory.

The sight of lead singer Joey Belladonna in an Indian headdress that was given to him by a member of the crowd lends some much needed comedy to the repeated refrain of ‘Die for the Indians’ during crowd favourite ‘Indians’, but Anthrax are capable of crafting listenable songs and are at their best when their output is more melodic, rather than just a case of playing their instruments fast and loud.

Lead guitarist Rob Caggiano has time to berate those sitting in the balcony, before asking “Are you ready for the law?” and instructs them to “Get off your asses and bang your heads” before launching into popular song ‘I Am The Law’.

Their set moves quickly, but lacks clarity and is at times incredibly dull, leaving those in attendance with sore ears, painful necks and fingers locked in a permanent salute to the devil.