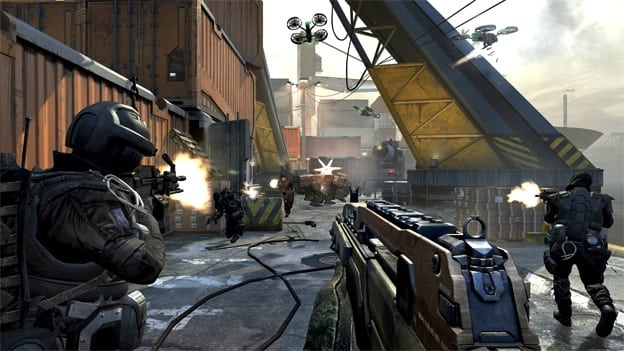 The games in the Call of Duty franchise have a well earned reputation for bombastic insanity, and the latest edition, Call of Duty: Black Ops 2, does not disappoint. From the first moment you are thrust into the head of your grizzled, toned, too-old-for-this protagonist you dispatch a medium sized town’s worth of Angolan MPLA militia, and the action only gets bigger from there.

The story itself alternates between a group of US Navy seals in 2025, and the group of CIA clandestine agents you will remember from the first Black Ops, now operating in the late Cold War.

And yet, for all the Michael Bay-style over the top explosions, Black Ops 2 does something that CoD hasn’t really managed since the first Modern Warfare: weave an engaging narrative and create interesting characters you actually give a damn about. The bad guy is not simply a faceless monster plotting the downfall of the US, and actually has motivations you are driven to understand, even actively sympathize with to some extent. By the end of the game though, you’ll probably genuinely want him dead, even if you can understand where he’s coming from.  For once, our enemy is not that perennial staple of the CoD series, the Russians. In fact they are entirely absent, which makes a refreshing change. Some famous faces from the past and present even put in appearances, but we won’t spoil things by naming anyone in particular here.

The weapons are everything you’d expect from a Black Ops game: a mix of classic Cold War era shooters, and high-tech super guns from the future. The sniper rifle/rail gun that can fire through concrete/a bus/whatever they’re hiding behind was a favourite during the campaign. There are also some nifty gadgets in the missions set in the future, one of which allow you to access kit otherwise unavailable on the map, and so comes in very handy.  These gadgets can be selected as part of a mechanic, which allows you to select and customize your load-out before each mission, which is a nice touch.

The campaign itself remains a somewhat linear affair that fans of the series will be very much used to. There is however an element of choice involved, and your decisions in various missions can affect the outcome of later ones directly, and will potentially affect later games (if there are to be any). Suddenly CoD has gone all Mass Effect on us. One of the other interesting diversions from the main chapters is the new Strike Missions. These essentially task players to complete a set of given objectives, in a given time period, with certain resources, normally a combination of troops and drones/automated emplacements.

The cool part is that you can both take control of individual NPCs (be they human or machine), or you can run the whole show from above, directing units to attack enemies or defend areas on the map. That’s right people; Black Ops 2 now has a real-time strategy element. Like we said earlier, these missions are interesting, and the concept is fun, but they’re also frustrating. When attempting RTS-style overall control, the NPCs are stupid. And we mean stupid. Like constantly head-butting a wall when ordered to attack stupid or walking into a hail of bullets stupid. Basically the computer is a complete moron. Our advice? As the old saying goes, if you want something done well, do it yourself.

The graphics and music are both good, with a soundtrack featuring tracks from Avenged Sevenfold, Elbow and Skrillex, amongst others.

The online multiplayer is pretty much the same as usual, offering a nice mix of slaughtering the enemy and fancy new weapons from the future. Zombies also offers the standard mix of interesting maps, and hordes of the undead for you to murder in their thousands.

In all, Black Ops 2 offers a decent upgrade to the series, and one that we hope to see carried on throughout future games.