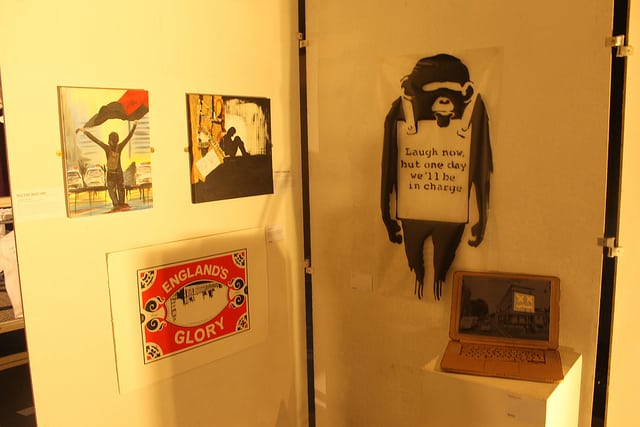 The artwork was displayed at MMUnion and has a chance to be exhibited at the People's History Museum. Photo: Ben Bradford

Manchester Metropolitan University students have had their protest-themed artwork exhibited at the Students’ Union (MMUnion).

The exhibition is titled ‘The Art of Protest: MMUnion Edition’ and is a collaboration between the Union and the award-winning arts charity NOISE.

Katie Parker, MMUnion’s Community Officer, who organised the event, said: “It’s absolutely incredible. We couldn’t have predicted the standard of work that we have received.”

The project was intended to be a reaction to the upcoming #Demo2012 student protest, and asked students to create something based around the theme of “The Art of Protest.”

Ms Parker said: “When I came into office we had to prepare for the demo, but the feedback from the student community, officers and staff was quite critical.

“They thought that it would be another opportunity for the media to portray students as anti-social or unengaged members of society.

“The exhibition is about reimagining what the concept of protest could be and encouraging students to be creative as they protest.”

Exhibited work included Barbie dolls hanging from the ceiling with notes about eating disorders attached and a painting of last summer’s Manchester riots, alongside work by prominent figures such as Banksy and Billy Bragg.

It took three months to organise and involved around fifty volunteers from all of the MMU faculties.

Collette Curry, a postgraduate researcher of Artificial Intelligence, created a piece highlighting the effects of isolation and depression, based on her own experiences of suffering with bipolar disorder.

She said: “I feel quite honoured and very happy to have my work selected. The whole exhibition is so good.”

80 people turned up to the launch night which featured films, live poetry and live music all by Manchester students.

Daniel Collins, in his third year of a degree in Fine Art, used “desecrated” flags to comment on the Euro crisis and said: “To see people engaging with my work and actually discussing it is really exciting on a personal level.

“This is the first time my work has actually been selected to be exhibited anywhere, so it’s really exciting and a great opportunity.”

The artwork will be placed into an online gallery and will be considered in the national ‘Art of Protest’ project, with a chance to be exhibited at the People’s History Museum.