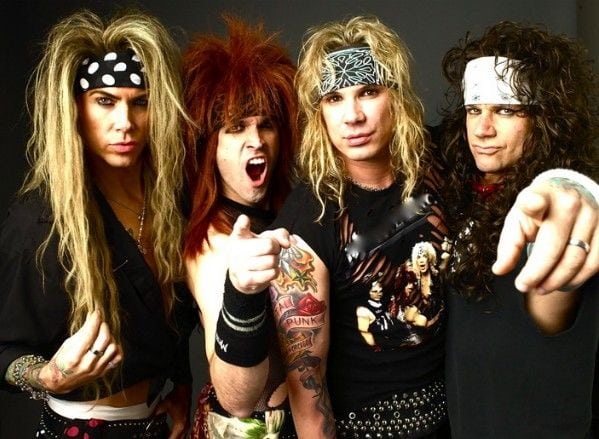 From humble beginnings as a hair-metal tribute act on the Sunset Strip to international hair metal gods, Steel Panther have given a resounding ‘fuck you’ to musical innovation and decided the best way in going forwards, is in-fact backwards. Selling out the Apollo without the help of mainstream media goes to show the power of the Internet and word of mouth.

Support act Falling Red got things off to a slightly shaky start – nothing to do with their performance, more so their sound guy who didn’t mic the majority of the guitar amps, making the set into one long drum/vocal solo. But of course, things looked very different as the curtain lifted for the main attraction. Manchester was one of the shows featuring Panther’s fancy screens and smoke machines. The opening video showing a game of battleship backstage put to rest any doubts that Steel Panther take what they do seriously, if there was any doubt there in the first place.

Unsurprisingly the highlights come from Panthers first album. The anthemic, Whitesnake-esque ‘fat girl’ brings the entire audience together in chorus, and then the completely ridiculous, and slightly controversial ‘Asian hooker’ brings about carnage with its killer chugging riff. The true spine tingling moment came with a semi-acoustic version of the heart-wrenching ballad ‘community property’, with the band all kicking in for that final explosive chorus, bringing a tear to the eye of even the manliest metal head.

Although Steel Panther are quite traditional in their regalia, they’re no slouches when it comes to technology. Singer Michael Starr took to making a special ‘boob cam’ to capture the relentless barrage of bosoms, although he did also revert back to the old school and just got a selection of ladies on stage for a spot of light entertainment.

The real joy in Steel Panther, for me, lies in the constant juxtapositions between cavemen-like masculinity and the clear homo-erotic visuals, and also the apparent lack of whit and charm which actually suppresses their extraordinary talent. I think the crucial thing to remember is they know it’s not funny or clever, and that’s what makes it work. The audience ranges from teenagers to older professional looking types, of both genders – not once did I see any female take offense to the over the top sexism. Once again Steel Panther has given me a night I’ll never forget, if you’re a rock/metal fan and have a sense of humour, you can’t help but love them.