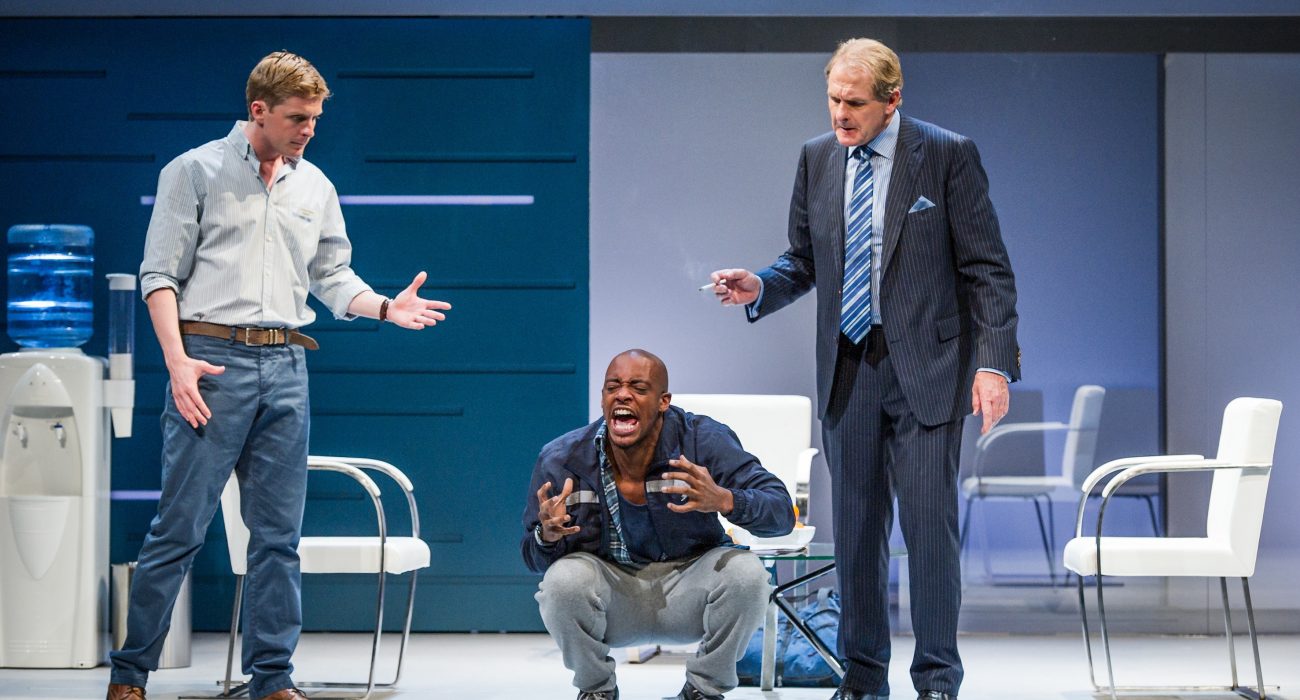 Is it us or them?

Blue/ Orange, Joe Penhall’s award winning play comes to the Opera House on a typically wet and bleak Manchester evening. Sporting a fairly star studded cast, that is if you’re a fan of Hollyoaks and Downton Abbey. It is a highly realistic story questioning the relationships between psychiatry, race and insanity, with a satirical twist running throughout.

It tells the story of Christopher, played by Oliver Wilson, who delivered a highly engaging and believable performance, he believes his father is military dictator, Idi Amin, and has been sectioned under the Mental Health Act. The ultimate power and ego struggle ensues, as his doctor, Bruce, played by Gerard McCarthy, believes it is too soon for Christopher to be released, diagnosing him with Schizophrenia. Whilst consultant Psychiatrist Robert, is keen to release him back into the community. Played by Robert Bathurst, Robert, best known for his roles in Downton Abbey and Wild at Heart, delivers a thoroughly entertaining performance, whose dry and satirical delivery provided light relief and humour at such a complex issue.

Through research like The Human Genome project, it has been discovered that in 90-95% of cases genes are not the cause of Schizophrenia. Therefore Blue/Orange addresses the more controversial, confusing, potential underlying causes; race, environment and culture. Issues that, as we see portrayed in Blue/Orange, can evoke extreme opposing views, and throughout the play my perceptions of the two sparring medical professionals continued to intertwine. At one moment I had labelled Bruce as genuine and good, and Robert as arrogant and obnoxious. At one point I was questioning their sanity! Are the medical professionals probing and thinking too deep? However as the performance progressed I found myself wavering and I could understand both sides of the arguments and issues raised.

The sparseness of the staging was extremely eye catching upon first glimpse of the stage, I heard utterances of, “well, they haven’t spent much money on the set”. With just a desk, water cooler small table, fruit-bowl and 3 chairs, the set was minimalist to say the least. This along with the fact that there were only ever 3 actors on stage created a really engaging performance for the audience, as it drew all your concentration to the extremely complex topic being dealt with.

By the end of the play, we are still questioning who is right and wrong, and trying to resolve certain issues. This to me represented the limited and differing insight into mental illness and in particular Schizophrenia, in today’s society. It leaves you questioning sanity, we blindly assume we know what ‘sane’ is. Penhall has blurred the boundaries between what and who we believe to be sane and insane, forcing you to question your own opinions. This is a deeply thought provoking performance, which I found really intriguing. It may not be to everyone’s taste, it requires concentration throughout, discussing a fairly taboo topic.  Nonetheless it is fast paced, engaging, brilliantly acted and will leave you questioning your perceptions of the two debating sides.

Blue/Orange runs until 24th November at the Manchester Opera House