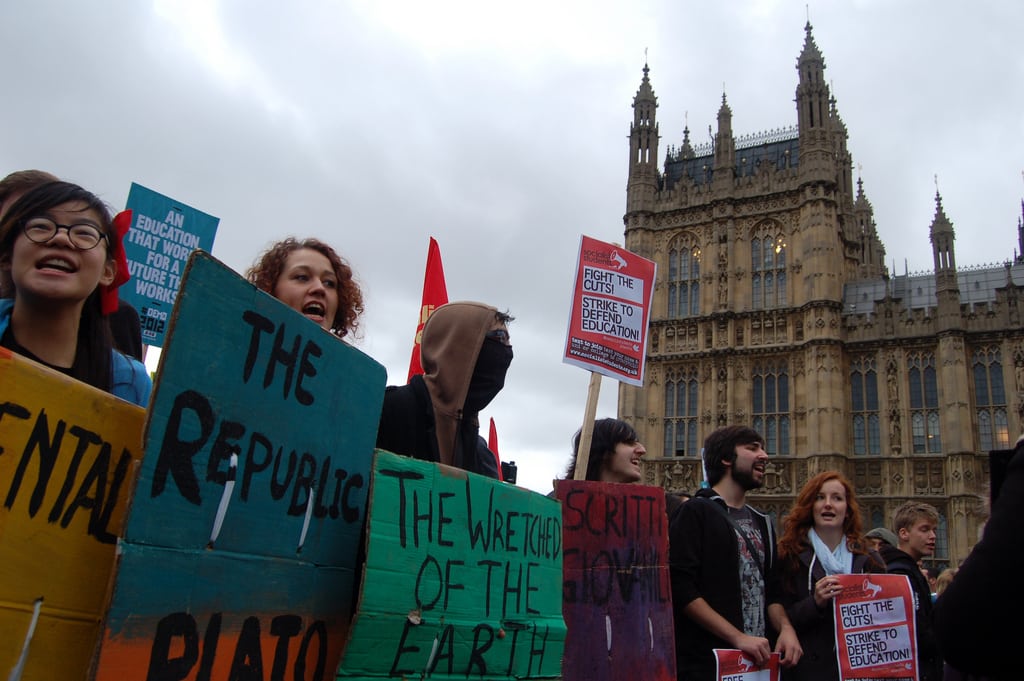 At the NUS National Conference in April 2012, it was voted to hold a national demonstration in the first term of 2012. It took six months to organise and advertise “#demo2012” across the country to attempt to bring every university on board. The NUS estimated that 10,000 students would attend the demonstration in London, with the catchphrase “Educate, Employ, Empower”. Less than half that number made it on the day, leaving many wondering what the point was, if any.

“We all have a responsibility to make sure that our actions don’t alienate the public.” Hampered by the vivid remembrance of the damaging scenes from the last protest called by the NUS, their hands were tied. With a route that aimed to breeze past Parliament, wanting to avoid any chance of a repeat of Millbank, the march seemed to lose its steam as it moved south of the river. The pouring rain was no encouragement, and it seemed that people only continued to wearily plod along because they knew their coaches would be at the end waiting.

I certainly don’t believe that resorting to vandalism and violence is any way to get your point across, but there’s something to be said about the heavy criticisms aimed at the NUS leadership for leading students on a not so merry trail to Kennington. The story was only given a cursory mention in the national media, because let’s face it – a few thousand students walking around waving placards is nothing new or exciting.

The most interesting point of the day was the crowd turning against Liam Burns, President of the NUS, and against the NUS itself. “Liam Burns, shame on you, you’re a fucking Tory too” was just one of many angry chants they shouted over his attempts to reach out to the shivering students student in the rain and mud. The diehard Socialist Workers Party and the so called anarchists were the only ones with enough passion to stick around to the bitter end to get their point across. They seem to think that the NUS isn’t left wing enough, full of career hacks with an eye on a future in the Labour Party (who apparently aren’t left wing enough either).

The buzzwords ‘educate’, ‘employ’ and ‘empower’ were a good attempt to stir some emotion in a distinctly apathetic national body of students. However, it’s a fairly vague statement to make. The demo wasn’t called as a reaction to some new policy, or appointment. It was more of a “we’re still mad about those fees you increased two years ago”. The demo meant something different to everyone, and whilst I agree with the general sentiment, how effective could it really be?

Let’s take each word in turn. ‘Educate’ – according to the NUS, “Education is a good thing in and of itself.” Well, that’s a revelation. Thanks for spelling that out, I had no idea! It’s actually insulting that they felt the need to express exactly what education means to people who have actively sought to further it on their own accord. It goes on to say that “we demand a properly funded tertiary education system, accessible to all” which it goes without saying is a laudable goal. There’s no set idea of what they mean by properly funded though, whether that’s fee free, or with a better system of student loans, or a graduate tax. The minor triviality of demands is clearly left to your own imagination.

‘Employ’ – youth unemployment is on the rise, according to the NUS. But, latest government figures show that youth unemployment figures between 16-24 are finally starting to fall, down 53,000 since last year as of the end of September. The fact is the UK faces a fragile economy struggling to pull itself out of the black hole of a double dip recession. What is important is to make sure that graduates are not being taken advantage of with the increasing popularity of unpaid internships, but these days we seemed resigned to the fact that for most of us, we need to put in the hours for crucial experience to give us the edge over the similarly qualified competitors.

“Politicians have a lot to answer for. Many of them lied to our faces.” That was two years ago. ‘Empower’ is the keyword here, because we musn’t forget that we have a democratic right to protest. But why has it taken so long to organise a demonstration if we’re so angry? This campaign needs a lot more than a flash in the pan protest. If we want to make sure education and employment are high on the political agenda, then there needs to be more effort made to build a momentum.

There are talks of bringing the campaign to campuses now, to continue to raise awareness, but there’s no strong sense of direction. Perhaps anger against the NUS isn’t so misplaced. However, it’s a difficult task to bring students together and unite on issues in their own backyard, let alone on a national level. Perhaps I’m just too jaded to see the potential, but demo2012 certainly didn’t inspire me to hope for anything better.