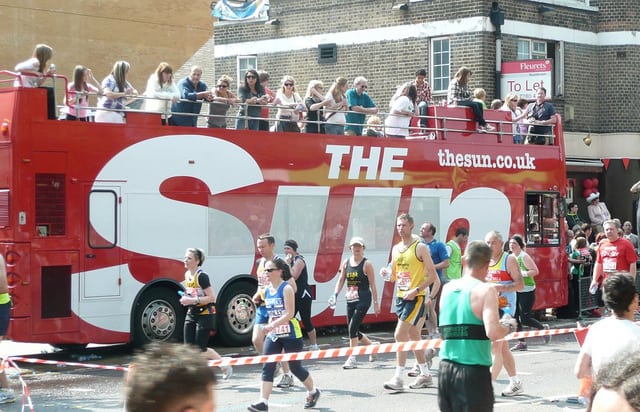 Around 80 students voted on the motion to ban The Sun newspaper. Photo: John Dee

The proposal was voted on by around 80 people and passed with more than half the popular vote at the weekly Union General Meeting.

LSESU’s General Secretary, Alex Peters-Day, said that she made the proposal because the paper is “sexist” and doesn’t sell well.

The elected official originally wanted to ban the paper without a vote, saying: “From my point of view if it were a good idea commercially to get rid of it as well as a good idea politically, I didn’t see why we couldn’t just pull it.

“Once Liam and the newspaper [The Beaver – LSE’s student paper] got wind of that they weren’t particularly happy so we had to facilitate a debate on it.”

Liam Brown, Executive Editor of The Beaver, said that Ms Peters-Day spoke to the student shop about removing The Sun.

He said: “They decided that they would pull it but we got a whiff of it and said that you can’t do this without asking people.”

The Beaver published an editorial column condemning Ms Peters-Day’s actions, accusing her of being “willing to stifle free speech”.

Mr Brown said: “These particular figures have done this before so we want to be careful.”

LSESU were accused of censorship in September when they temporarily removed copies of the London Student newspaper from campus featuring a provocative comment piece on gender-neutral toilets.

Mr Brown said: “We weren’t too happy about that because it’s a really bad precedent.”

The papers were later returned including a statement from the Union and Ms Peters-Day said: “We had to physically take it in to put a statement in but that took place within a half hour, so there was a bit of exaggeration there.”

In 2010 there was also a motion to ban both The Sun and FHM from the LSESU shop, but it was voted down at a meeting which included “sexist heckling and wolf-whistling” at the Women’s Officer.

This year’s Women’s Officer, Alice Stott, voted against the ban in the recent meeting and said: “I’m a bit disappointed, but that’s what people voted to do.”

She continued: “I think it’s very easy to single out The Sun as sexist, but in doing so you turn a blind eye to sexism which is pervasive and pernicious across all of the mainstream media.

“It’s simplistic and classist to single out The Sun, it implies that misogyny is something only working class men do when in fact it happens across the national press.”

Asked why The Sun was targeted, Ms Peters-Day said: “I think because it’s quite symbolic to be honest. I know that’s not necessarily the best reason but it is the only mainstream paper that still has a Page 3.

“The fact that The Independent has hardly any woman columnists is a really awful thing, but I’m not sure it’s as bad as The Sun and Page 3.”

This month is the 42nd anniversary of Page 3 and there is currently a campaign against it titled ‘No More Page 3’.

Last week, MMU student and ‘No More Page 3’ activist  Hayley Devlin told The Mancunion that the campaign got under way after its organiser noticed that – despite the success of British women at the Olympics – Page 3 models were still the most prominent women in The Sun throughout the games.

LSE’s Hayek Soceity responded to the ban by organising a free giveaway of The Sun on campus, but their stall was reportedly attacked and vandalised.