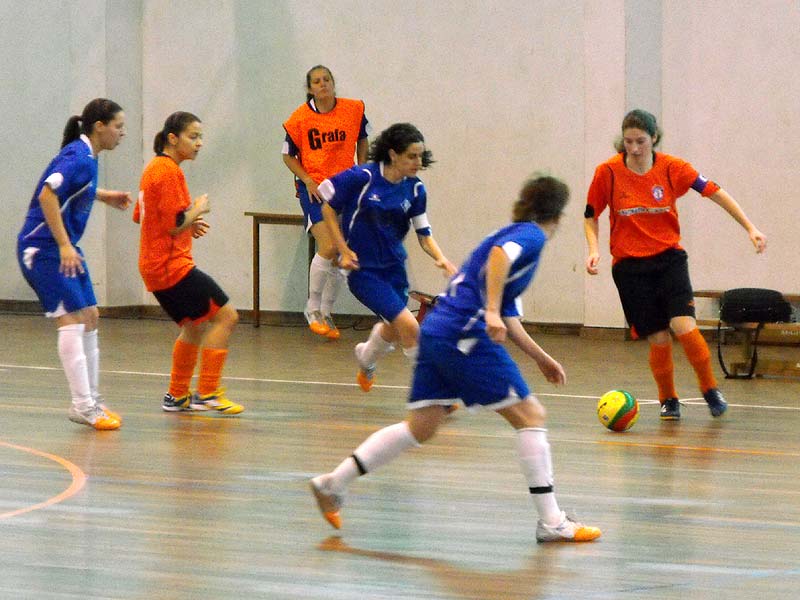 Manchester Women’s Futsal got their first points on the board this weekend by comfortably defeating Sunderland University 10-2 at the Sugden Centre.

Manchester made the better start of the two sides and dominated early proceedings. Throughout the first 10 minutes the home team frequently carved out chances, moving the ball at a good tempo and breaking through the Sunderland defence at will. Despite such impressive build-up play Manchester came up against an inspired Sunderland goalkeeper and were, for a long time, profligate in front of goal. However, Manchester called a time-out in the eighth minute and responded to the brief interlude by opening the scoring. A strong break from midfield allowed Eva Lockner to break through on goal and drive an unstoppable shot into the top right-hand corner to give Manchester a deserved lead.

Yet, Sunderland found a shock equalizer almost immediately; Manchester switched off in defence and allowed Sunderland to put together a quick passing move and finish from the edge of the area from their first shot on goal. The goal was a shock to Manchester, who had controlled the entire game, and caused an animated dispute between Manchester’s eccentric coach and the Sunderland substitutes’ bench. The girls were galvanized into action again and re-took control right on half-time; another midfield break by Yina Luk allowed Lockner to arrive into a similar position and this time she fired calmly into the bottom corner.

In the second half Manchester upped their game and tore into the hapless Sunderland defence. Skilful midfielder Yina Luk commanded the entire game from the middle with her neat control and composure on the ball and deservedly added to the scoring, beating two players before slotting home from the edge of the area. She quickly scored again from inside the area to make it 4-1 before Meida Pociunaite converted from the penalty spot to add a fifth. Lockner was unable to add to her tally after suffering a nasty injury which later precipitated a trip to hospital – Manchester will be hoping she recovers quickly after her strong first half performance.

Sunderland called their time-out in a vain attempt at limiting the damage but Manchester returned even stronger and quickly added a sixth as Teresa Castro found the corner with a neat finish after an impressive run down the left. Sunderland pulled another back to make it 6-2 but in the final five minutes Manchester were rampant. Substitute Abbi Cole finished off a neat move to make it 7-2 before Castro tore through the Sunderland defence again and finished steadily for an eighth. Manchester rounded off the scoring in the final few minutes as Cole and Pociunaite both doubled their tallies.

This was an important result for Manchester after successive away defeats to Newcastle and Durham in their two previous fixtures. Next up is a tricky journey to Leeds Metropolitan University on Saturday evening.