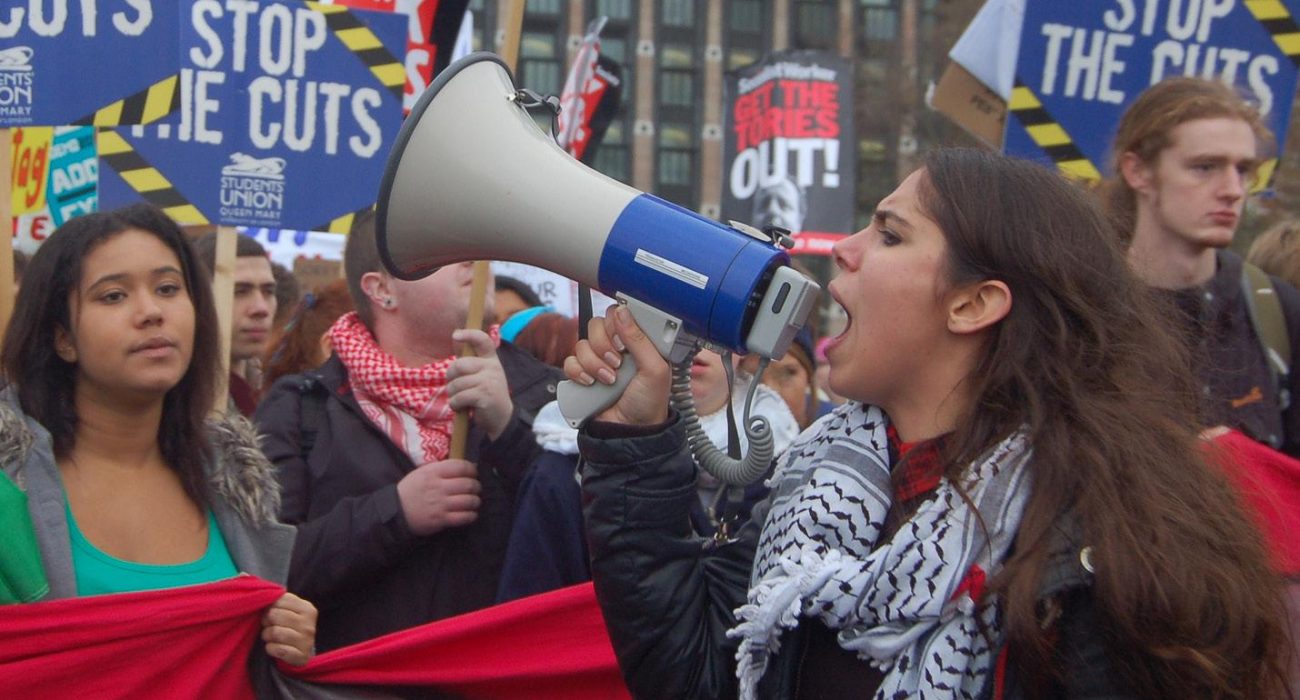 NUS President Liam Burns was booed and pelted with eggs and fruit as #Demo2012 was marred by in-fighting and disillusionment.

Burns – one of a number of speakers who took to the stage in Kennington Park – was rushed off by security as members of the crowd pushed their way on to the stage and encouraged protesters to head back to Parliament.

Campaigns and Citizenship Officer at the University of Manchester Students’ Union, Khalil Secker condemned those who took to the stage. “It’s so divisive to our movement,”he said. “I think their actions do have a habit of putting people off left wing politics or student politics in general and that is destructive.”

The President himself laughed off the incident, joking on Twitter his “egg dodging is pretty fierce.”

Many protesters were angered at the route the NUS leadership decided to take for the demo and showed their frustration on the march. With “NUS shame on you, where the fuck have you brought us to,” proving to be a popular chant.

In a move challenging the authority of the NUS alternative student protest organisation National Campaign Against Fees and Cuts have announced a march on December 5 and called for continued action.

NCAFC organiser Michael Chessum said in a press release, also printed in The Guardian, “Whatever the turnout [on November 21], a single demonstration will not be enough to challenge the government’s agenda.

“We need to make the demo the start of an on going campaign.

“That is why we are supporting the call for a national day of action involving students and workers at schools, colleges and universities across the country on 5 December.”

University of Leeds student David Lewsey said: “I think it’s a fucking shambles. They marched us away from the centre of London, away from anywhere of any political significance.

“We’re standing in the rain in the middle of nowhere.”

Approximately 3-4,000 people turned up, from as far away as Bristol, Leeds and Edinburgh, including around 150 from Manchester universities. The NUS originally predicted 10,000 protesters would attend.

Marching under the banner “Educate, Employ, Empower,” the demonstration, supposedly against rising fees and education cuts, followed a heavily criticised route through south London and culminated with a rally in Kennington Park, near Surrey County Cricket Club’s ground, The Oval.

Some students felt a radical minority spoilt the demonstration.

“I feel today has been completely undermined by a bunch of anarchists kicking Liam Burns off the stage,” said University of York student Patrick Evans. “Now all today will be remembered for is the day the student movement turned in on itself rather than as the day we took a stand against the government.

“I just don’t understand what good they thought they were doing.

“I think that was worse than Millbank in terms of making students look bad, it made us look like divided idiots, which frankly, we were.”

Speaking to The Mancunion, NUS Black Students’ Officer Aaron Kiely said, “There are no plans for more demonstrations at the moment, but I don’t think one every two years is enough.”

The march on Wednesday started at Temple tube station in central London and briefly passed by Westminster, where a small group of protesters locked arms and sat down, trying to prevent people crossing south of the River Thames. Protest leaders quickly told marchers to ignore the group and continue as planned.

Sam Rae, from University of Sheffield, did not agree with clogging up the bridge, “If you stand outside Parliament, it’s a very confrontational act as this symbol of the politicians who you’re angry at are right in front of you.

“I’m a bit upset but I suppose this was always going to hap¬pen.”

Others felt the final location of the rally was a poor choice.

Sebastian Chowdhury, Further Education representative for the NUS from Manchester College said: “Given the weather conditions today, maybe in hindsight Parliament would have been a better choice.”

Owen Holland, a PhD student from the University of Cambridge, said, “Whilst it’s good that the NUS leadership organised and called for this demo they didn’t need to take us to a park in Kennington.”

Compared to the violent student protests two years ago, the demonstration was peaceful, with only a few scuffles with police near Westminster when protesters tried to break out of the designated area.

Police said they acted here because it was a breach of the Section 12 agreement that defined the route and area the protest could legally occupy.

The historical significance of Kennington Park, the site of a major protest in the nineteenth century, appeared lost on many students.
The protest failed to garner major national media cover¬age.

The University of Manchester, the largest student body in the country, originally booked eight coaches to take students to the protest in London, but failed to sell enough tickets and only took three coaches, including some Manchester Metropolitan students.

Nick Pringle, General Secretary at University of Manchester Students’ Union described the demonstration as a success, adding, “The really important thing is that we don’t lose momentum and we take this back on to our campuses.”