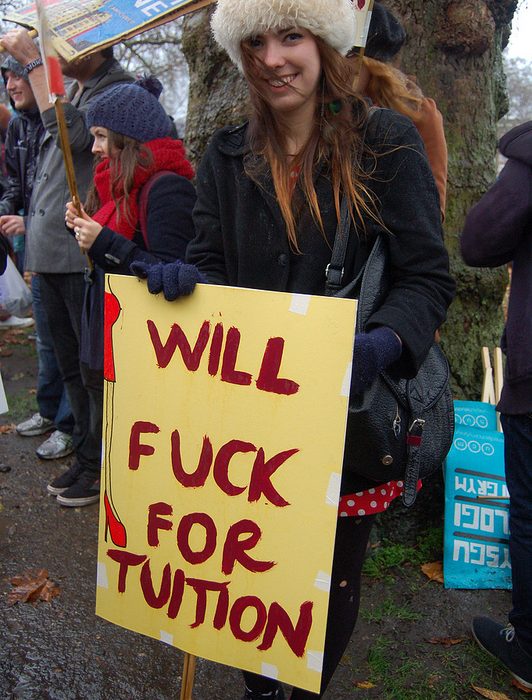 “Will shag for tuition”

On Wednesday 28th November, the Independent published the findings of an undercover report in to the website ‘SponsorAScholar.co.uk’ which it has been claimed can offer students up to £15,000 a year to cover their fees in exchange for sex.

Unfortunately, this isn’t the first website to be exposed, nor will it be the last, and it’s not only here in the UK, but across the world. The cost of education is more than monetary. From Malaysia, to the US, there have been stories of students (male and female) who have entered prostitution in order to afford the opportunity to better themselves at university.

Prostitution is a legal and moral grey area. In the UK, it is not illegal to have sex for money, or to pay for sex amongst consenting adults, but if someone has been trafficked or coerced into prostitution then this is illegal, regardless of whether this information is known at the time. Advertising sexual services on the internet is also illegal, but SponsorAScholar and similar websites will skirt this issue by claiming to facilitate ‘companionships’ with no knowledge that clients will agree to a sexual encounter.

The greatest problem lies in the hidden risks which may be overlooked by desperate students who are looking for a means to an end. TV shows such as ‘Secret Diary of a Call Girl’ have glamourised the sex industry, portraying Belle du Jour as a sophisticated high class call girl who attends parties and jets off into the sun, but glosses over the very real dangers of an unregulated industry rife with exploitation. The story is based on the true story as published by Brooke Magnanti who worked for a London escort agency during her PhD at the University of Sheffield.

The reality is that many of those who turn to such work are not as fortunate. The undercover reporter for the Independent who met with an “assessor” for the SponsorAScholar website, was told she would have to undertake a “practical assessment” that was necessary to “prove the level of intimacy” before being permitted to join the website. When Huffington Post UK attempted to set up an interview with another undercover reporter, they were told there was a waiting list of two to three weeks. If this is true, this so called “assessor” would be meeting with multiple female students in an attempt to sexually exploit them with only the vague promise of securing a “scholarship” at a later date.  The website, which has since appeared to have crashed, even claimed that these generous businessmen would be able to claim a tax break for providing a scholarship.

The Independent reports that “young women facing financial hardship brought on by the rise in the cost of studying were urged not to be tempted into using the website.” Yet, a cursory glance of the National Union of Students website, in particular pages belonging to the Women’s Officer and Welfare Officer, showed no warnings or response. There is also nothing currently available from our Students’ Union at Manchester.

As part of the “Student Sex Work Project” research at Swansea University, a website has been launched to offer information, advice and guidance to students that may be involved in the sex industry in Wales. The project aims to promote learning and understanding about student sex worker needs and associated issues, and to provide a non-judgemental sexual health service. Talking about the sex industry is still a difficult area for many; it’s either condemned or pitied. Hopefully this project will help lead the way in challenging perceptions, and offering help to those who need it.

Prostitution on the streets of Manchester is well known, and with the largest student body in the country, it is important that the universities, the Students’ Union and local authorities take this issue seriously.