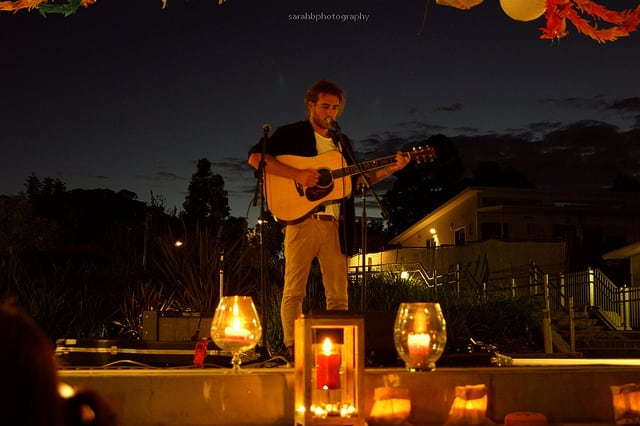 Reality music competitions may have a lot to answer for; responsible for what some have described as the deterioration of music at the hands of corporations hell-bent on making a quick buck. But every so often, reality programming can weave another layer into the rich tapestry of independent music. Matt Corby is proof of this. In 2007, Matt appeared on the reality show Australian Idol as a fledgling musician, whose performances saw him finish runner-up. Since then, Matt moved to London, signed to Mumford and Sons’ Communion Records and embarked on a sold-out UK tour, which tonight brings him to a packed Deaf Institute.

The night’s ambiance, one of electricity and expectation, is crafted during the stunning acoustic renditions of the two support acts; Lucy Mason and Bears’ Den. The sound of the two acts matches the mature crowd that had gathered there that night, but it’s Bears’ Den who really invigorated the crowd with their own distinctive brand of indie folk.

The moment Matt takes to the stage, there’s an ushered silence that remains unbroken until he begins to delicately strum his acoustic guitar. Comparisons have been drawn with the late Jeff Buckley, and it is almost haunting how similar the two sound. To see Matt Corby perform is the closest one can come in witnessing Jeff Buckley before his untimely death. Not to say that he doesn’t accomplish his own distinctive brand of melancholy, underpinned by the obvious blues and jazz influences. Throughout the course of the night, he switches between his acoustic and electric guitar, before finally taking to the keyboard.

Matt makes no qualms about the fact that the evening was to be about just the music; whilst countless musicians feel the need to dress ostentatiously, Matt is nonchalant in his skinny jeans, baggy T and signature pony-tail. Before moving into ‘Letters’, Matt takes a moment to describe the inspiration for the song; a girl who brought him the “closest to love”, leaving the female majority swooning at the thought. Closing out the set with ‘Brother’ – already a major hit in his homeland – Matt restores some optimism in the hearts of the audience, and judging by the subsequent eruption of applause from the crowd, they were appreciative of watching this star in the making.