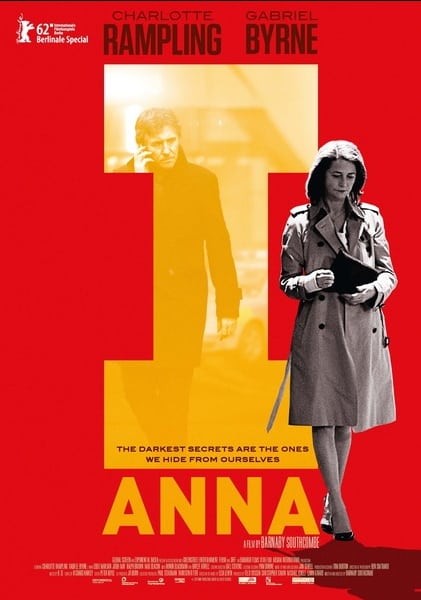 Set in present day London, I, Anna is non-action film noir that draws on drab cityscape to evoke the dark internal world of Anna Welles, a lonely middle-aged divorcee played by Charlotte Rampling. By reinventing the role of femme fatale in the image of an older woman, the film has potential to disrupt the young and darkly alluring archetype, but by following the predictable formula of male saviour and female victim, it offers a reactionary exploration of gender dynamics and female sexuality.

Through jagged camerawork and music that powerfully evokes isolation and mental instability, viewers are interpolated into Anna’s fragmented mindset. The psychological thriller takes a non-linear structure, syncing our perspective with that of the disturbed protagonist by jumping from past to present, mimicking Anna’s agitated mental state.

Aside from her age, Anna exhibits the hallmark qualities of a femme fatale, namely: dark mystery and elusiveness coupled with a deep vulnerability. She has a secret born out of a shameful personal tragedy, crippling Anna emotionally and causing her to suffer from amnesia – a mechanism with which to evade the pain.

In an attempt to get on with daily life as if nothing has changed, Anna seeks human contact by attending dating evenings for middle-aged singletons. Director Barnaby Southcombe describes the story as ‘a moving account of the complications involved in a spurned, older woman’s right to find love again in today’s world.’ In an exploration of ‘the older woman’s right for love’, the film throws out some pretty shocking suggestions about the state of female sexuality in the twenty-first century. At the dating events, Anna switches identity, calling herself Allegra and performing for the male gaze in figure-hugging dresses, high-heels, a lick of lipstick and never making the first move. This self-objectification distances Anna from a true sense of self – a fragmentation subtly indicated in the title by the comma that separates ‘I’ and ‘Anna’. In a pivotal moment in the film that takes place between Anna and a forceful male who has responded to her alluring persona, we witness a tragic fragility in Anna as she turns to her set of ‘woman’s weapons’ – reapplying her lipstick and removing her high-heels – momentarily succumbing to entrapment through a deluded sense of empowerment.

By constructing Anna in the pre-defined role of femme fatale, her character is given little room for new moves. The film tries to assert its contemporary relevance through an urban London setting, but shoots itself in the foot by painting female sexuality in a problematic light. It’s unsavory combination of a ‘1950s-type’ woman with an independent twenty-first woman is encapsulated in a scene in which Anna is pictured ‘fixing her face’ in the bathroom of a dating event when a mysterious old woman approaches her with some apparent wisdom: ‘Things ain’t what they used to be. We can meet the men we want now, we can choose. So get your skinny legs back out there and flaunt them!’