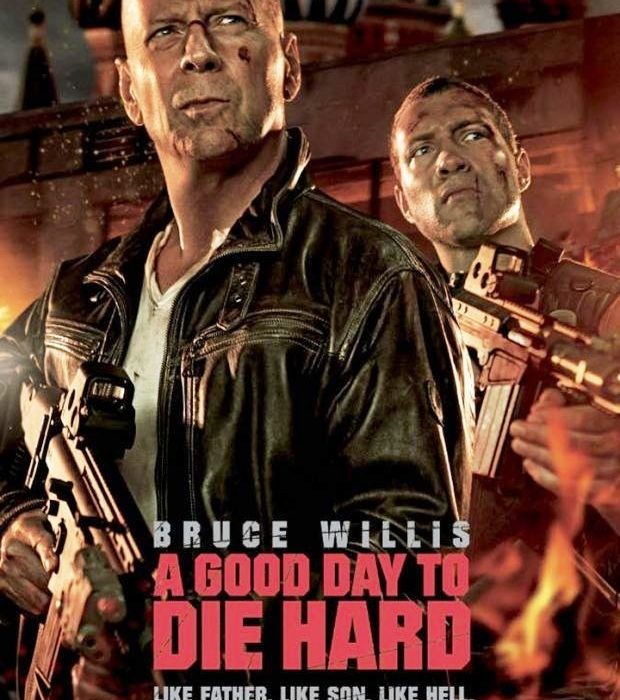 Movie Poster for 'A Good Day To Die Hard'

A Good Day to Die Hard (release: February 14th) will follow on from previous films in the franchise by taking America’s most famous rogue-cop John McClane and placing him in a violent and unforgiving criminal underworld. A familiar plot involving weapons of mass destruction, evil Russians and this time a dynamic father/ son relationship will be the underlying premise of Die Hard 5 and promises an action-filled couple of hours for film lovers searching for a much needed mid-winter adrenaline rush.

Though Die Hard 5 is unlikely to break new ground or redefine what it means to be a good thriller, it will be a safe bet for film lovers who enjoy fast-paced action and a light yet witty narrative (witty in the cheesy Hollywood sense anyway!)

This latest rendition sees McClane travel to Moscow in Russia where his estranged son Jack finds himself in the Russian slammer. McClane begins the movie blissfully unaware of the kind of trouble his son is in – but as the trailer makes perfectly clear, before long angry Russian criminals and exploding cars help spur McClane into the kind of action we have come to expect from him over the past 2 and a half decades. Though little has been given away regarding the intricacies of the plot, we know McClane’s son is not as helpless as he  initially believes – it turns out Jack is New Jersey’s answer to 007; so when both McClane and Jack realise they have been pawns in a much wider plot, with plenty of ‘gadgets’ and a car-trunk load of guns they set out to stop the Russian terrorists together.

Though the premise of the film seems water-tight it also seems as though Die Hard 5 will be about as generic as it can get without being Die Hard 4 with different bad guys. The head Russian terrorist Komorov is expectedly evil, self serving and hates America whist his assistant Irina is a genuinely nice girl caught up with the wrong people – add this to the fact we have Russian terrorists and it all feels like a throwback to any action movie from the 1980’s.

Die Hard 5 will be worth a watch and may surprise its critics on release. But from what we know so far, its predictability and its tried and tested formula could be both its Achilles heel or its greatest strength depending on what you look for in a film.