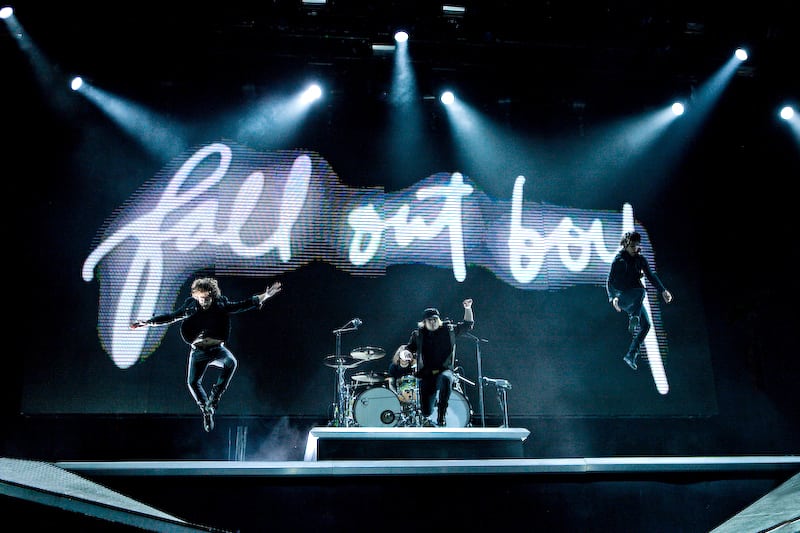 The Take Over, The Break’s Over

All the members have kept themselves busy since their “hiatus” in 2009. Stump launched his own solo material which was a completely different direction and Wentz also created a side project Black Cards. Both seemed to be met with negative reviews, the only members whose work was met with a positive reception were the two quieter members of the band; Joe Trohman [guitar] and Andy Hurley [drums]. Both were involved with members of thrash metallers Anthrax and mathcore outfit Every Time I Die to create the rock supergroup The Damned Things.

However, just over half a year since the announcements denying the reunion, Fall Out Boy fan boys and fan girls rejoiced worldwide when it was officially announced; Fall Out Boy is back. Wentz claimed that “[FOB] need to plug back in and make some music that matters to us.” Does this mean that Wentz’s and Stamp’s respective solo projects meant nothing and Andy Hurley [drums] and Joe Trohman’s supergroup combined with Every Time I Die and Anthrax was nothing? That wasn’t the only words he would regret.

Wentz later added that “The future of Fall Out Boy starts now. Save Rock And Roll.” Some critics have criticised those last four words stating that their attempts to “save rock and roll” when it was them who helped destroy some of the music scene. Stupidly, the band also burned their entire back catalogue in Chicago which is sure to piss a few old fans off.

Without sounding sceptical, why, now, do Fall Out Boy want to reunite and begin making music again? But then again why does any band reform after years away? To please the fans, to forget those horrible solo efforts or just for the money?

For Fall Out Boy it’s a combination of all three and having seen the success of fellow pop-punkers Blink-182. They have already been announced to be releasing a new album later this year, appearances on Jimmy Kimmel within a fortnight and to be playing Reading and Leeds.

It may have only been 4 years since their hiatus began but music has evolved and those 13 year olds who used to love Fall Out Boy have now moved on to the newest fad in music including myself. I never was a huge Fall Out Boy fan, I still remember the first time listening to From Under the Cork Tree. But much like Panic! At the Disco, many of these fans have moved on.