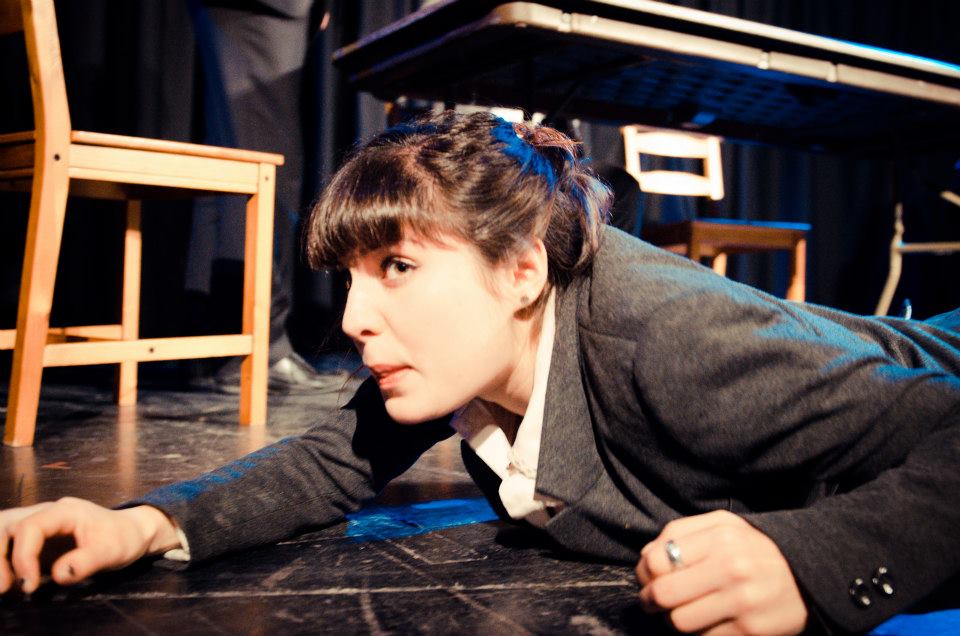 A member from the Drama Society performing at the MIFTAs. Photo: Helena Davies.

Every year the Drama Society holds its very own version of the Edinburgh Fringe festival called the MIFTAS. Over the next couple of months, there will be a huge range of acts by members of the society. The plays are an eclectic mix from journeys of World War Two to a ‘’twenty four carat disaster’’. According to the Chair of the society Helena Davies ‘This performance season is the centre of the Drama Society’s year, and not to be missed.’ Tickets are £5.50 for adults, £4.50 for students, and concessions and £4.00 for Society members. Below is a schedule of the upcoming plays, so don’t miss out on this showcase of talented writers and performers.

‘Paper Shield’ follows the story of Nick Searson, a young journalist who has just started his career at The Shield; the biggest selling tabloid in England. Young and ambitious, he takes his work incredibly personally, seeing it as his obligation as a journalist to inform the public to the best of his ability. The newspaper is covering the high profile case of Sammy Norton; a young girl whose recent kidnapping has touched the hearts of the nation. As the play unfolds, and more leads are discovered, Nick’s involvement in the case borders on obsessional. He eventually spirals out of control and surfaces amidst one of the nation’s darkest scandals.

My Boy Jack by David Haig, directed by Rob Beck

The year is 1913 and war with German is imminent. Rudyard Kipling’s determination to send his myopic son to war triggers a bitter family conflict which leaves Britain’s most renowned patriot devastated by the warring of his own greatest passions; his love for children – above all, his own – and his devotion to King and County.As well as dealing with the hardships at The Front, the piece accurately details the effects warfare has on those left behind and the personal battles that rage when one is forced to balance a sense of duty with love of a child.My Boy Jack is a moving account of the anguish at the heart of a man whose storytelling continues to delight millions all over the world.’

“The bull-horned god awakened from within”. Taking a timeless figure from Greek mythology, this new piece of writing charts the progress of the Maenad as she seeks to escape a world littered with the cruelty of Men. What makes a Man? What makes a Woman? Who is to blame for the “world’s unending woes”? The audience are guaranteed a spectacle of epic proportions, with action that is not for the faint-hearted. It will be an enjoyable, and at times uncomfortable, watch for all.

That Face by Polly Stenham, directed by Amy O’Toole and Thea Paulett

That Face is a powerful and darkly comic look at an affluent family in freefall. Mia has been suspended from boarding school. Her brother Henry has dropped out altogether. And Martha, their mother, manipulates them all. That Face explores the trials and tribulations of a modern day dysfunctional family. Stenham’s deeply rich characters played out in a beautifully simple script, creates the perfect dynamic for an absorbing production that highlights the intricacies and the extremities of the human condition.

The Conquest of the South Pole by Manfred Karge, directed by George Combe

Four chronically unemployed men transform crushing boredom and desperation into a triumph of the human spirit…namely a re-enactment of Roald Amundsen’s victorious 1911 expedition to the South Pole. Equipping themselves with all the gear they can beg and steal, they turn a laundry-filled attic into an Antarctic adventure. But can they keep the traumas of real life out long enough to reach the Pole?

To be Frank, My Dear, I don’t Remember Written and directed by Deng Maohui

What happens when you put a group of guys together in a testosterone charged environment? They behave like boys, start swearing, talk sex, and discuss bogus philosophy. To be Frank, My Dear, I don’t Remember follows the story of a boy who enlists in the army, detailing his growth as he battles with his environment.

The stage is set for one of the biggest nights of Brindsley’s life. His sculpture is about to be bought by one of the richest art-collectors in the entire world and his gorgeous girlfriend may soon become his fabulous fiancée.  What could possibly go wrong? A fuse blows and his entire flat is plunged into darkness. Over the course of an evening, we see how things go from terribly bad to screamingly awful. Secrets are revealed, plans are ruined and furniture is stolen.  Will Brindsley be able to save this farce, or is it all going to be an A-one, copper-bottomed, twenty-four-carat disaster?