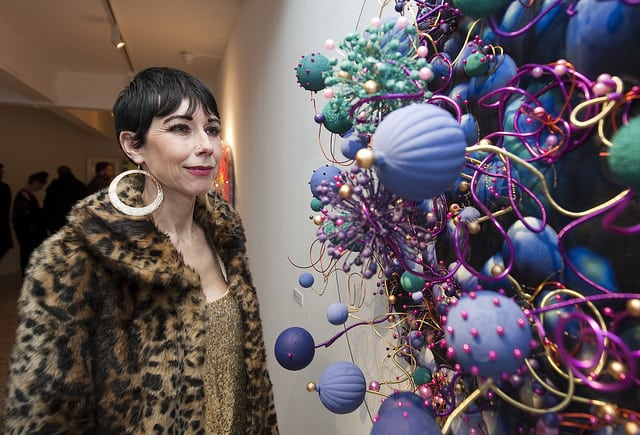 ‘Four’ at Cornerhouse: The Curation

Whilst browsing the interesting installations and original sculptural pieces of Cornerhouse’s latest exhibition, ‘Four’, several questions came to mind.  To shed light on these, I spoke to one of the three young curators who worked on this exhibition, Elizabeth Gibson, to find out her main aims for the exhibition, how the team went about the selection process and why she thinks Cornerhouse, once again, managed to hit the nail on the head.

What drew you to the work of the artists you chose to include in the exhibition, and did you want it to embody a particular theme?
We had written out a brief for artists to respond to, so we were looking for applications for work that we felt fitted the criteria we had set out, which included originality, creative use of media and accessibility to a wide audience. We didn’t have a definite theme in mind; we simply wanted to pick the best works and see if a theme started to emerge. In the end several did, such as colour and texture.

What made you decide to include solely British artists in ‘Four’?
The brief was open to artists anywhere in the world, and indeed we got submissions from all over the globe (over 600 in total!). We would happily have included international artists in the exhibition; it just happened that the four we picked were British. It wasn’t a conscious choice to only have British artists.

Did you encounter any problems during the curation process, considering your age and experience?
Not really; the hardest thing was narrowing down so many good applications to just four. I don’t think our age or inexperience was a hindrance; I think it’s a good idea to have Young Curators at galleries like Cornerhouse as we often have different ideas to older and more established curators, and this can lead to greater variety in the exhibitions a gallery puts on.

Can you give one piece of advice to any young curators hoping to follow in your footsteps?
Don’t be afraid to voice your opinion – I am known for being quite a quiet person but when you are working with a group of people who all have different ideas, communication is key. Make sure your ideas are heard. If there is one piece of work you think would really work in an exhibition, fight its cause! In both exhibitions (Lost is Found – at Cornerhouse in 2012 – and Four) there was a piece I felt strongly about that I managed to “sell” to the others by describing clearly why I thought it would work. Both times the piece made it into the final exhibition. So don’t be afraid to speak out!

How did you feel when you were chosen to take part in curating an exhibition for Cornerhouse?
Very excited; I had previously been on the curation team for Lost is Found and it was an amazing experience. I hoped curating Four would be as enjoyable; it turned out to be even more so.

What do you think makes Cornerhouse unique in comparison to other galleries across Manchester and the UK?
The fact that it is quite small I think gives it a more intimate feel than in some other galleries. In addition, it is accessible straight from the street which means that you can pop in whenever you like and spend a short time there, or you can go for a whole evening and incorporate a meal and a film. It’s a lovely place to be. And they do amazing hot chocolate.

How do you think the exhibition was received by the viewing public, and if you could go back and change anything, would you?
We had lots of visitors on our opening night, and lots of positive comments, so I think it was well-received. I don’t think I would change anything; I really like the way it turned out. All the artists have excelled themselves, and the work is brilliant.

Elizabeth’s responses provide us with a rare insight into the finer details of the curation process, and could certainly be said to drum up more appreciation for the time and effort that goes into organising such a thought-provoking and entertaining exhibition. Giving some great nuggets of advice, Elizabeth demonstrates why she and other young curators should be granted the highest praise for their contribution to the city’s culture.