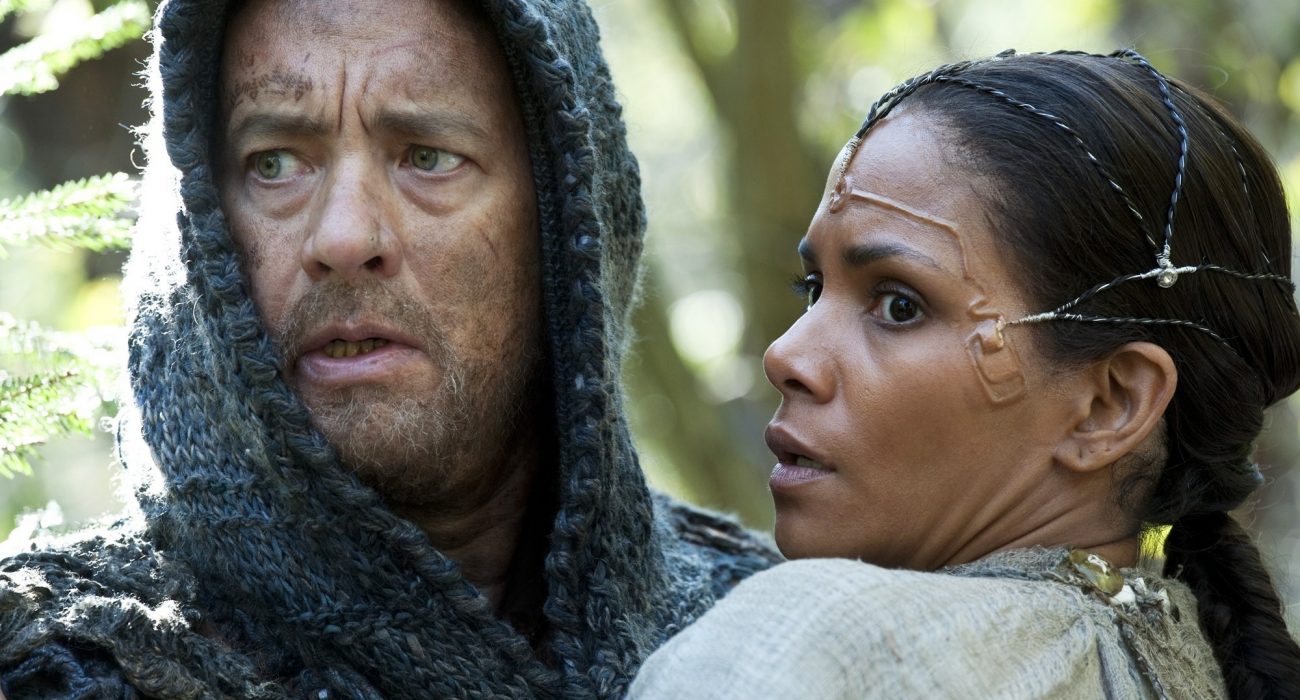 Cloud Atlas follows individuals connected throughout the past, present and future whose actions ‘echo through time’. Helmed by The Wachowski’s and Run Lola Run director Tom Tykwer, and boasting an all-star cast including Tom Hanks and Halle Berry, I had nothing but high expectations when I sat down to watch Cloud Atlas.

The scene is set under a starry cosmos with a scarred and grizzly Tom Hanks musing over ancestral stories, which are all ‘tied up into one.’ We’re then thrust into the six tales that make up Cloud Atlas. In 1849 a lawyer helps liberate a tortured slave. Next in 1926, in England, a young composer seeks fame and fortune by aiding an older one. In 70’s San Francisco, a tough journalist is on the trail of corruption in a Nuclear power plant. A publisher is confined against his will in a nursing home in modern day England. Then in 2144, a clone in Neo-Seoul endeavours to expose her society’s dark secrets. Lastly, in a post-apocalyptic world a tribesman battles his personal demons to help a beautiful and idealistic ‘off-worlder’.

The leading cast members each play four or five different roles throughout the film. Tom Hanks gives an interesting range of performances, from an eccentric nineteenth century doctor to a psychopathic Irish gangster turned author. His most impressive role is as the tribesman Zachry, who is haunted by a demonic spectre on his quest towards redemption and love. But it’s Ben Whishaw, who recently assumed the title of Q in Skyfall, that stands out. As Robert Frobisher, he’s hired as an assistant to an aging, legendary composer. Forced to hide his love for another man in 1920’s English society, his tragic tale is the most poignant and captivating – definitely an actor to keep your eye on in the coming years.

The attempt to transform Jim Sturgess into a Korean man, and Halle Berry and Doona Bae into Caucasians was a questionable choice. Also the make-up department left Hugo Weaving, in his role as the sadistic Nurse Noakes, looking like Arnold Schwarzenegger on his way to a costume party as Nurse Ratched from One Flew Over the Cuckoo’s Nest.

Needless to say, Cloud Atlas is grand and overly ambitious. Initially the fast pace and constant switching between narratives leaves you inquisitive and eager to know more. But the film soon plateaus when you realise that each story is as predictable as the next, and with such loose connections between them, you end up feeling like you’re watching 172 minutes of similar-looking trailers.

As all six tales progress, the notion that these characters are connected and that life transcends time, place and death is excessively stressed, through the philosophical rhetoric. This leaves you hoping for a revelatory climax, which sadly never comes. The stories are left scattered like the canvas of stars that open and close this epic, leaving the audience to contend with the highfalutin philosophy of the film, which is essentially one slack idea: if you screw up in one life, you can redeem yourself in the next as a futuristic Korean freedom-fighter or Tom Hanks looking like he’s just wandered off the set of Pirates of the Caribbean.