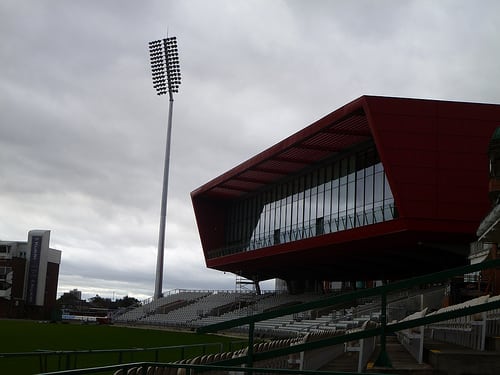 Lancashire County Cricket Club has struck a deal with Dubai-based airline Fly Emirates for naming rights to Old Trafford. The stadium is in West Manchester, just around the corner from Manchester United’s home of the same name. The ten-year sponsorship agreement will see the ground, home of Lancashire CCC for 150 years, renamed Emirates Old Trafford, as the club ends its hunt for greater income ahead of their ongoing redevelopment. The effects of the deal will be implemented immediately, as Lancashire renovate their unique pavilion in preparation for the busy summer ahead.

This is not the only such sporting deal for the airline, which also has sponsorship rights to Durham’s Chester-le-Street ground – officially the Emirates Durham International Cricket Ground – as well as the Emirates Stadium in football, at Arsenal’s Ashburton Grove arena. Much like the Arsenal kit, Lancashire’s domestic T20 strip will also now adorn the company brand.

Emirates’ skyway rivals, Etihad Airways of Abu Dhabi, are the current sponsors of Manchester City, holding both stadium naming rights and kit sponsorship. With wealthy Middle Eastern investors financially backing sport in both the west and east of Manchester, the city is further establishing itself as an internationally recognised sporting hub, following on from the great success it achieved as host of the 2002 Commonwealth Games.

Currently, cricket is very much at the forefront of the minds of British sports fans, as England prepare for two Ashes series against Australia this calendar year – first on home soil, before travelling Down Under this coming Winter.
The newly-named Emirates Old Trafford will host its first Test match for three years this summer when Michael Clarke’s men come knocking, the Aussies hoping to reclaim the bragging rights after back-to-back Ashes defeats in 2009 and 2011. Manchester will host the third test in the five-match series, and will be followed by Chester-le-Street in a sponsorship double whammy for Fly Emirates. The last time the Manchester complex saw Ashes action was the third test of the famous 2005 series, which was fought to a nailbiting draw. The club will, no doubt, be hoping for similar positive publicity in August, side by side with their new investors.

For sporting teams around the world, outside endorsement and stadium sponsorship are now one of the commonplace lucrative factors that have contributed to the universality and much-publicised financial attraction of sport. For that, there have been many detractors. Lisa Pursehouse, chief executive of Nottingham CCC, has been quoted as saying that selling the naming rights to their Trent Bridge stadium would be akin to “selling our soul”. Many fans and experts alike, however, understand that the financial outlay of modern sports clubs means that sponsorship is a necessity if the books are to be balanced.

Although stadium-naming rights are frequently attributed to the modern era of sport, the practice is believed to be trackable as far back as 1912, when Boston’s Fenway Park baseball diamond was so named after the owner’s company, Fenway Realty. It retains the name to this day.