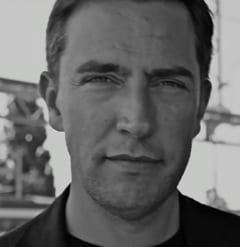 Do you have a full time job as well as being a writer?

I used to, I worked in the city but I haven’t been working for the last year because I got made redundant. When I originally wrote the book, it was during a period in which I wasn’t working.

What did you used to do in the city? Was it writing related?

It had nothing to do with writing whatsoever funnily enough!

Have you always written?

No, I fiddled around a bit here and there. I enjoyed writing at school, but didn’t really do much after leaving. I started writing again just before the millennium because I wasn’t very happy in my work and was trying to find some other outlet. So I just started writing, thoroughly enjoyed it and subsequently gave up work to have a go at it full time.

So, you had no literary training at all?

Did you go to University?

I didn’t go to University, no. I was supposed to go to Oxford where my brothers went, but I got involved in a band and got a girlfriend and took my eye off the ball when it came to education. I decided that I didn’t want to go.

Your novel has been described as ‘dark and disturbing’, what made you write about such a taboo subject?

The type of art that I like, whether music, books or other forms, tends to be on the darker side of things – that’s what I find interesting. To be honest, I think it’s easier to write stuff which has got a darker side to it. I wanted to put someone into a situation which would turn their life upside down, turn their politics, their philosophy, and the whole way they looked at the world. I started thinking about this and I found out that the number of people who are actually victims of rape is way higher than anybody thinks or knows. It’s very rarely reported because of the stigma and all sorts of things go with it.

Would you say the book is aimed at a certain group of people? Were you trying to get through to anybody in particular?

Erm, not really. I think a lot of people may read what reviewers say and think ‘I don’t want to read that, why would I want to read that?’ To me it’s not so much about rape, it’s about what happens to someone who is caught up in a traumatic event and how they deal with it.

Did you ever suffer from writer’s block?

No not really, the bit I find most difficult is the starting bit: starting at the beginning of the day or starting a new chapter, getting the engine moving.

Lastly, clichéd question, but do you have any advice for students who are aspiring writers?

Read lots, read widely. Try to understand the things you are interested in and why this might be, then write. Lots. Keep trying and then look at your work with some distance or get someone else to read it and critique. The more you do, the more likely you are to find the style that you want to write in and find a voice of your own, one that’s not copied.