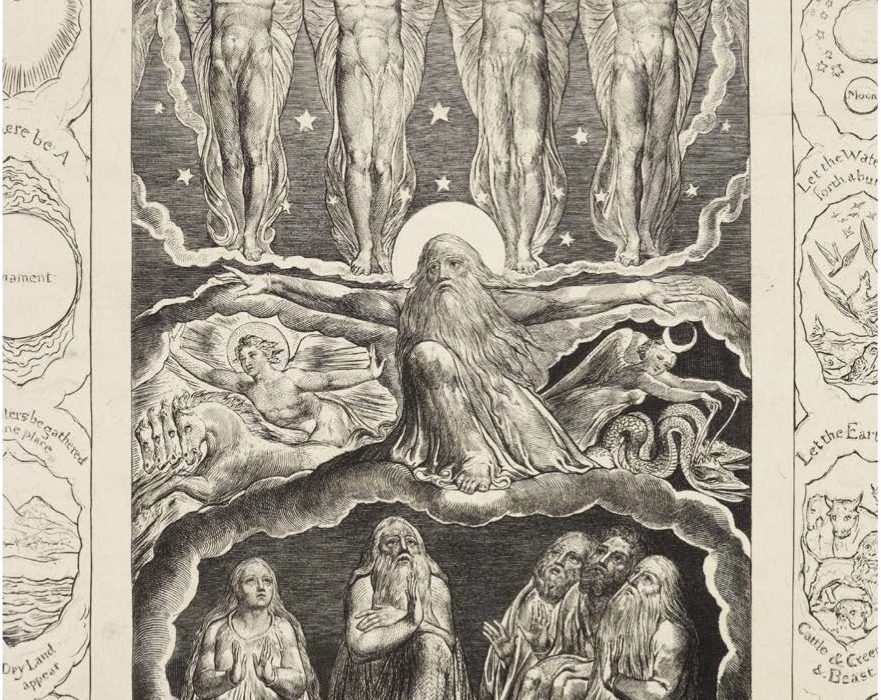 To get to the old John Rylands Library in Deansgate (built in 1889 if you were wondering), you have walk through the revolving glass doors of the new building, past the cheap postcards and overpriced café, up the stairs and into the sturdy, stone Gothic past.

Apart from the name, ‘Burning Bright’, the current William Blake exhibition in the library does not focus specifically on Blake’s poetry, but his collaborations and commissions from other writers to create engravings or watercolours for their books. He engraved prints for Mary Wollstonecraft’s book of short-stories in 1796, and designed and engraved a series of images in response to Virgil’s verse in 1821. The small, intricate, cross-hatch of his engravings meant that I kept steaming up the glass boxes that the books were enclosed in because I wanted to look closer.

The exhibition carried on into the Spenser and Crawford rooms where there was one piece of Blake’s work in each and the rest of the exhibition was the rooms themselves: the brownest rooms I’ve ever seen, with shiny spines of books behind glass for wallpaper, and the lights a mix between Victorian street lamps and a bluebell.

The only pieces of Blake’s own poetry in the exhibition were two facsimiles of Blake’s own ‘illuminated manuscripts’, published by William Muir in 1885. Blake did not send his poetry to be published on William Caxton’s printing press in his lifetime, but stuck to a much earlier form of craftsmanship. His books were etched, printed and hand-coloured in water colours and stitched together to make up a volume. All the poems, lettering and design are the work of Blake (although sometimes his wife helped with water colours).

His Songs of Experience is open on the page of the poem The Little Girl Found, but I couldn’t quite read the poem inside its glass cage so I went and looked at a printed copy. I was struck by its plainness; what would Blake think of his poem being printed this way? There is something so much more intimate about reading a poem that was written by the author’s own hand – not just scribbled on a piece of paper but painstakingly designed and intricately produced. All that so modern publishers could dismiss it as ‘too hard to read’ and throw his hard work away for black words on a white page, all the same size, all the same.

Postscript: On my way out of the John Rylands I was approached by a tiny old woman who told me she had been trying to find her way out for twenty minutes. I led her out and she told me she liked the Blake exhibition but she only saw half of it because most of the books were displayed quite high up. This is my official complaint on behalf of her.