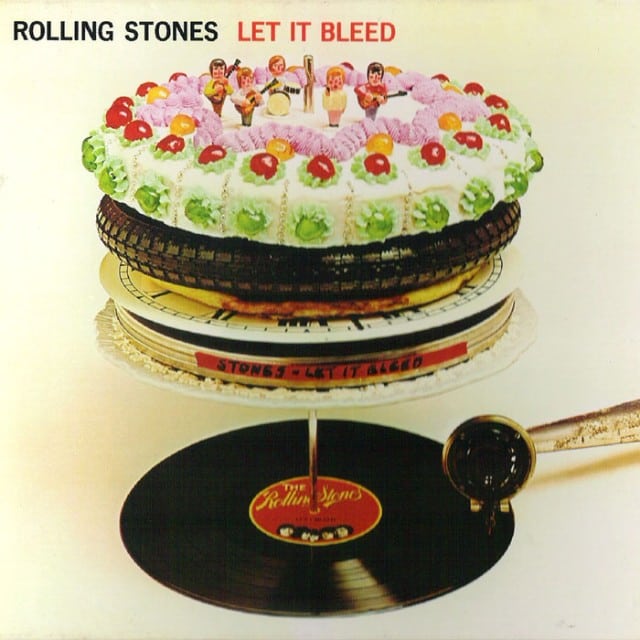 This unusual matching of music and food makes for an iconic album cover.

From the vault: The Rolling Stones – Let It Bleed

1969 was a year that would change our history and culture. Man had finally set foot on the moon, an X-rated film had won the Best Picture Oscar and the Woodstock festival was born. But it was in December 1969 that The Rolling Stones stated the hippie movement was over on Let It Bleed and they didn’t realise how true those words would become at a little-known place called Altamont.

The album’s opening track, ‘Gimme Shelter’, has become a Vietnam War classic along with The Stones’ ‘Sympathy for the Devil’. The song details of the horrors of the world and along with former Raenette Merry Clayton and her breaking voice just add to the depth of the song.

The apocalyptic era Jagger sings about became even more realistic one day after Let It Bleed’s release, the infamous Altamont festival. The Hell’s Angels ran security for the festival, which ended with one homicide, three accidental deaths and the band forced to evacuate the stage as a riot ensued.

The album also contained a country version of ‘Honky Tonk Women’ now called ‘Country Honk’ and, as stated by Keith Richards, this is the original version of the song. The album closes with The Rolling Stones classic ‘You Can’t Always Get What You Want’ with them teaming up with the London Bach Orchestra. The song covers the three main topics of the 60s: drugs, politics and love. The lyrics start with optimism but resign to the disillusion these topics have caused.

Let It Bleed also became iconic for its cover of figurines of the band on top of a cake featuring a tyre, clock face and a pizza was created, in part, by then-unknown cookery writer, Delia Smith. The album cover was even chosen by The Royal Mail as a stamp set of iconic album covers in 2010.

The album benefits from one of the best music partnerships in the history of music in Jagger and Richards. Let It Bleed is arguably one of The Rolling Stones’ best albums and that’s quite a feat with a career having lasted over fifty years.